ONCE again Newbridge hosted a very large group from our twin town of Bad Lippspringe on their official visit. This year the group included 23 young people from their ‘Katholische Landjugend’ which is somewhat similar to our Scout movement and 18 of them stayed in the scout den from the Saturday to Wednesday morning.

They were treated to a barbecue and games and interaction on their arrival at the den by the Newbridge scouts and indeed the weekend was a big success for both groups.

The weekend started with a visit to Glencree Centre for Peace and Reconciliation where the connection only came to light recently. It was to Glencree that hundreds of German children came after W W 2 to be rehabilitated and then fostered out to Irish families. 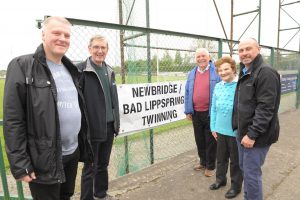 This was part of Operation Shamrock in Glencree run by the Irish Red Cross and the French Sisters of Charity and it has transpired that over 50 of the children came from the Paderborn and Bad Lippspringe area.

Our guests were shown around and saw the photographs and news reports from the time  and many questions were raised regarding names and as to what happened to all these children. After some years here most returned home but some stayed and made their home here. This visit included the only German graveyard in Ireland and a wreath was laid here.

There was also an afternoon spent in Sarsfields G A A Club with adults and children taking part in many events of fun and competition which was won by Bad Lippspringe so the Cup returned with them.

Permission was also secured to visit Turlough Hill where there was much German influence with the machinery there and finally another highlight was at Naas races where the German Ambassador was our special guest and she took time to introduce herself to everyone in attendance. The Ambassador is a great supporter of the Twinning concept and was delighted to see so many young people involved with us.

A fare well party was held on Tuesday night with music,chat and some food and on Wednesday a very tired busload departed on their return journey but with many promises of coming back again in 2020.

The work of the Twinning committee now turns to August when already over 120 adults and children are booked to travel to Bad Lippspringe for the Town Festival of Light.