ANY Kildare supporters hoping for an improvement from their team after an inconsistent Division 2 league campaign were left sorely frustrated on Saturday evening as their Championship began with a whimper against Wicklow in Carlow. 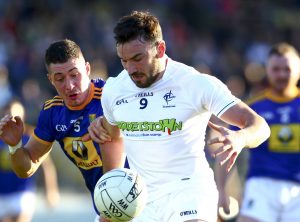 In a game that was eerily similar to many that Kildare played through this year’s league, the team took their foot off the pedal in the second half and ended up in a position where the game was in the balance right until the last ball – despite leading by seven points with 15 minutes to go.

Fully focused and on their game, this is a good group of players and Kildare played quite well through the first half to lead 0-9 to 0-4, albeit some of the seven wides they kicked were quite poor.

Kildare then sleepwalked through the second half and unforced errors started to creep into their game. That gave Wicklow some encouragement and after Dean Healy waltzed through the defence on the hour mark to set up Darren Hayden for the game’s only goal, panic set in and the mistakes got worse.

It’s a pattern that we have seen time and again and a team that carried even a small bit more quality than Wicklow would have punished Kildare more severely. Put simply, if Kildare repeat this performance against Longford on 26 May then their Leinster campaign will end that day. There needs to be a huge improvement from this display but given that there wasn’t a marked improvement on what was produced during the league there will be little confidence that they will be able to do so.

Much more analysis and reaction on this game will feature in this week’s Kildare Nationalist.