LAST weekend the Catholics of Kildare celebrated the 1,500th anniversary of the death of their patron Saint Conleth with a High Mass and the reading of a special Papal message.

On Saturday (May 4) the parish of Newbridge and the diocese Kildare and Leighlin came together on St Conleth’s feast day marking the millennium and a half since his death on 4 May in the year 519 by a pack of wolves in a Leinster forest whilst on his way to Rome.

The weekend of celebrations began with Mass in Saint Conleth’s Parish Church, Newbridge, with Bishop Denis Nulty the principal celebrant, with over 700 people in attendance.

One of the highlights was the reading of a special papal message from Pope Francis which was sent specially for the celebrations.

“His Holiness Pope Francis was pleased to learn of the celebration marking the fifteen-hundredth anniversary of the death of Saint Conleth, patron and first Bishop of Kildare, and he sends prayerful greetings to you and to the priests, consecrated men and women and lay faithful of the diocese,” read the message.

“Joining you in giving thanks to almighty God  for the example of this saintly bishop and abbot, His Holiness encourages all of you to remain rooted in fidelity to the Lord,” he said before encouraging the parishioners into what he called “missionary outreach”.

“Entrusting the people of Kildare and Leighlin to the intercession of Saints Conleth, Brigid and Laserian, the Holy Father cordially imparts his apostolic blessing as a pledge of strength and peace in the Lord,” he concluded. 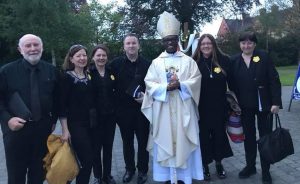 The message was signed by Cardinal Pietro Parolin, Secretary of State for the Vatican.

On Sunday (5 May ) a pilgrim walk took place from the parish church out to Old Connell where it is said Conleth lived in seclusion.

In years gone by on the Sunday after St Conleth’s Day a pilgrimage would place from the parish church in Newbridge to Old Connell, about two miles outside the town.

This pilgrimage was revived this year for the celebrations and more than 80 people took part in the walk to what is now an  historic graveyard where a short prayer service and blessing of the graves took place.

Local historian Paul Cooke gave an overview of the stories of some of those who are buried in the graveyard which is now sited in a modern stud farm.

The weekend of celebrations concluded on Monday night when the parish novena saw the Papal Nuncio to Ireland, Archbishop Jude Thaddeus Okolo as principal celebrant and homilist for the second night of the annual novena.

Conleth is said to have been an Irish hermit and metalworker, as well as a copyist and skilled illuminator of manuscripts, and is believed to have come from the Wicklow area.

While living in seclusion at Old Connell on the River Liffey, Conleth was persuaded by Saint Brigid to make sacred vessels for her convent.

Conleth, Tassach of Elphin (Saint Patrick’s craftsman), and Daigh (craftsman of Kieran of Saigher were acclaimed the “three chief  artisans of Ireland” during their period.

Conleth was also head of the Kildare school of metal-work and penmanship.

According to Brigid’s biographer, Cogitosus, a community of monks grew up which, under his guidance, excelled in the making of beautiful chalices and other metal objects needed in the church, and in the writing and ornamentation of missals, gospels, and psalters.

A product of Saint Conleth’s metalwork for which he is noted is the crozier that he fashioned  for Saint Finbarr of Termonbarry.

The Diocese of Kildare appears to have been founded around 490 by Conleth who, with the assistance of St. Bridget, then presiding over the monastery, erected the cathedral and became first bishop.

Legend tells us that Conleth died when he was attacked by wolves in the forests of Leinster on pilgrimage to Rome on May 4, 519 and he was buried nearby.

In 799 his relics were transported and laid beside Brigid’s in the great cathedral in Kildare.

His relics were finally laid to rest in Connell  in 835 to protect the inhabitants from invading Danes.