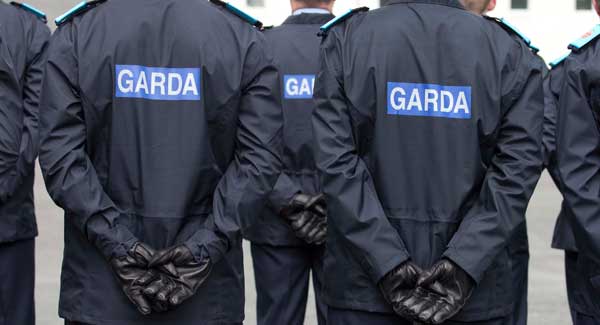 Update 8.25pm: A Garda Inspector arrested as part of an investigation into suspected corruption in the force has been released without charge.

Immediately upon his release he was placed on suspension from duty.

The Garda Inspector was among three members – a superintendent, an inspector and a garda – arrested this morning in relation to alleged links with a Munster organised crime group.

The Garda Superintendent and a member of Garda rank have had their periods of detention further extended and remain in Garda custody.

Update 6.30pm: Three members of An Garda Síochána arrested as part of an investigation into suspected corruption in the force have had their periods of detention extended for a further six hours.

A detective, a Garda Superintendent and an inspector can be held for up to 24 hours, after they were arrested this morning.

John Devitt from Transparency International Ireland says police forces around the world could be open to possible corruption.

“Every police force across the world is susceptible to corruption and Ireland was almost unique in so far as they didn’t have an internal anti-corruption unit,” said Mr Devitt.

“I have been told that the Garda Commissioner was shocked when he arrived that there wasn’t a specialised unit to undertake investigations and intelligence-led policing into Garda corruption.

“The tendency has been to wait until a call has been made to someone sitting by a phone waiting for information on corruption.”

Update 8.45am: A high-ranking officer is among three gardaí being questioned in relation to alleged links with a Munster organised crime group.

Specialist officers arrested the three members – a superintendent, an inspector and a garda – in a tightly-guarded operation this morning.

The Taoiseach Leo Varadkar has says it is a worrying situation.

He said: “I haven’t received a briefing from the Minister of Justice on it, so I don’t know the background to it, but obviously it’s a serious development and we’ll just have to see how it goes.”

It has not been disclosed what station or stations the gardaí are attached to and details of where they are being questioned is being kept secret.

Sources said it is “unusual” that the three individuals have been arrested for separate alleged offences.

The superintendent has been arrested for breach of the provisions of section 62 of the Garda Síochána Act, 2005 – which relates to disclosing information.

The inspector has been arrested under the Misuse of Drugs Act 1977-84, but the specific suspected offence has not been disclosed.

The garda has been arrested for suspected conspiracy to pervert the course of justice, but the legislation has not been cited.

The arrests follow a lengthy and complex investigation by the Garda National Bureau of Criminal Investigation (GNBCI), which is based in Dublin.

One garda has already been arrested and questioned in relation to allegedly leaking information to a criminal gang.

Some of the leaked information is alleged to be linked to a planned raid by the Criminal Assets Bureau targeting a suspected money laundering associate of the Munster drug gang.

It has not been disclosed what legislation the three gardaí are being detained under, with Section 4 of the Criminal Justice Act being the standard law used. This allows for a maximum detention period of 24 hours, excluding rest breaks. Organised crime legislation and drug legislation allow for longer detention periods.

Deputy Commissioner John Twomey, Policing & Security confirmed the arrests this morning saying they are being questioned over a suspicion that they have been involved in the commission of one or more criminal offences.

The Deputy Commissioner said: “An Garda Síochána is fully committed to investigating any alleged wrong-doing or corruption involving Garda personnel, and will work with other relevant agencies in doing so.

“As this is a live and ongoing investigation, it is not appropriate to make any further comment at this time.”

The Minister for Justice, Charlie Flanagan, said: “While I obviously can’t comment on individual cases, I expect a thorough and timely investigation.”