A trip down memory lane for Two Mile House

MEMBERS of the community in Two Mile House and the surrounding areas gathered in Toughers of Newhall the weekend before last for a get together spanning the last 60 years.

The idea was first mooted back in February 2018. Tommy and one of the other organisers were at a funeral when they raised the possibility of organising a get together. They talked about it several times during the year and, after Christmas, decided to begin planning; getting tickets printed and going around “to all the relevant houses that we thought might be interested”. 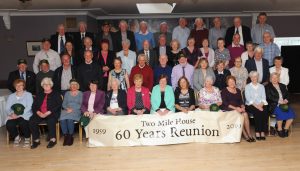 Some of the attendance at the Two Mile House reunion

Around 140 people showed up on the night in Toughers, ranging from people in their 30s to their 80s, for a fantastic night of reminiscing and catching up with old friends and neighbours.

“We didn’t have music, deliberately,” Tommy said, adding that people went from table to table. Alongside finger food and a bar, the get together included a raffle and spot prizes. “We had a ball. Everybody enjoyed it. We had loads of old photographs and we had some old videos of the field days that went on back in the seventies.”

Many stories and memories from throughout the years were swapped, from how local man Pat Buckley won the Grand National in 1963 to the good times they had as kids growing up in the area.

“We talked about the youth club and the table tennis club and the badminton club and the camogie club and the football club… we had all those things growing up when we were kids,” said Tommy. “And we were talking about the cowboys and the Indians that we played and now it’s all about the tablets… how the whole thing has evolved and how much things have changed. And that’s the kind of a night it was.”

New book goes behind the scenes of the Army Rangers