IT was a surreal evening in St Conleth Park on Wednesday as Kildare GAA legend Johnny Doyle donned the white jersey once again at the ripe old age of 41 and helped the junior side book a place in the Leinster Final at Croke Park with a 1-18 to 1-9 win over Longford. 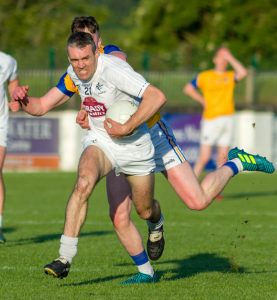 Johnny Doyle was back in a Kildare jersey on Wednesday evening as the Kildare juniors beat Longford to book a place in the Leinster Final at Croke Park
Photo: Luke Wynne

Youngsters Jack Robinson and Padraig Nash had done a good job of softening up the Longford defence before Doyle made his introduction in the 34th minute.

He wasn’t just there to make up the numbers either and his first of three points was a quite outrageous effort and brought the loudest cheer of the evening.

Afterwards, Kildare manager Declan McGrath said that while it’s great to have somebody of Doyle’s experience and status in the game within the dressing room that he is very much on the panel for what he can do on the pitch.

“The basis of asking Johnny in was on how he was playing for his club, just the same as any other player. It wasn’t just to have Johnny Doyle in the dressing. He was brought in as Johnny Doyle, the current Allenwood footballer. He came on there and showed what he has. His first point there was absolutely incredible, people in the stand were laughing it was that incredible,” said McGrath.

“He is a fantastic player and a huge asset for us. He commands a huge amount of respect, he speaks well there amongst the guys and he is encouraging everybody. It’s just fantastic to have him in there,” added McGrath.

While it was only right that Doyle’s first Championship appearance in a Kildare jersey since he last featured in the Senior Championship back in 2013 should hog the headlines it would be unfair to suggest it was all about him.

Robinson and Nash particularly caught the eye but all six forwards got on the scoresheet from play in the first half while Jack Bambrick and Colin O’Shea led a strong defensive performance and Daniel Grehan, Seamus Hanafin and Mark Grace got the better of the midfield battle.

“When we sat down to pick it it took us five or six times to get it right. At the end of the day it took five or six subs to come on there and push us home. They are a hugely talented bunch and at least four or five players from that team are capable of playing at a higher level. I hope they do, just not for another couple of months,” he added.

McGrath was asked in particular about the impact that Robinson and Nash had on the game. 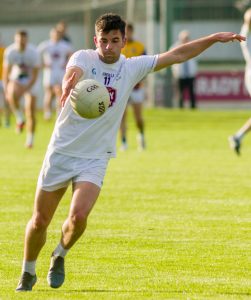 “Jack and Padraig are two incredible footballers and they have proven their talent all the way through the underage, and Padraig was with the seniors as well of course. They are two very talented players but I’m sure they would be the first to say that the ball they were getting was excellent, the half back line in particular were very good in getting them the ball and allowing them to do what they do, but I thought they were excellent,” he said.

Kildare now play Meath in a repeat of last year’s final on 23 June in Croke Park as the curtain raiser to the Leinster Senior Final.