THE Women’s World Cup gets underway in France on Friday evening when the host nation play South Korea in the Parc Des Princes in Paris.

In what is sure to be a great boost for women’s football in this country every game of the competition will be covered live on RTE and TG4. 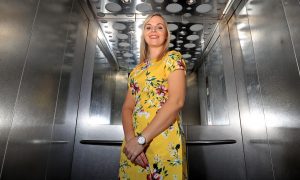 Among those analysing the games on TG4 will be a very familiar face around soccer circles in Kildare, Laura Cusack.

Laura is a UEFA ‘A’ licence coach and spent a long time as the FAI Regional Development Officer in Kildare and is currently the Girls Academy Coach with the Kildare and District League, and still plays in the KDFL for Naas AFC when her busy schedule allows.

She is also the fiancée of Irish Boxing Champion Eric Donovan and made her TG4 debut when speaking on air shortly after his title win against Stephen McAfee in March. Clearly, she caught the attention of the Irish speaking channel who were keen to tap into her football knowledge.

“I was thrown in at the deep end on the night of Eric’s fight! Because it was such an exciting night and just after Eric’s fight I was still very excited but it nice to have a go and speak a bit of Irish. I was actually more impressed with Eric, I taught him a bit of Irish and he was able to stand in the ring and speak it perfectly just minutes after his fight so I was really proud of that,” she said.

Since leaving her permanent role of eight years with the FAI, Laura is currently studying to be a Primary School teacher in the Hibernia College but admits that getting her point across in Irish will be a challenge.

“It’s hard enough to be starting off commentating but doing it another language is really making it hard for myself! But I’m really looking forward to it. I’ll be co-commentating on the games so there will be a Gaeilgeoir commentator and I will be there to give my analysis and opinion. I’m down to do eight games at the moment and have a busy weekend to start with, two games on Saturday and two on Sunday.

“Most football people would love to be involved in a World Cup, if you can’t go as player or manager you might as well be involved as a commentator or analyst. It’s a great opportunity for me and it’s great that it will give me that push to improve my Irish as well,” said Cusack.

The competition is well timed and will hopefully prove helpful to her college work as well.

“All I have left in my Irish course is two week’s in Gaelteacht and an Irish oral at the end of that so the timing of this is perfect because it will really help with that. I will actually have to leave the Gaelteacht to cover the 3rd/4th play off game so I’m hoping that I have will my best Irish in time for that game,” she said.

The opportunity to promote the women’s game in the country is that Cusack takes very seriously. As part of her role with the KDUL she spent last week managing the Kildare u13s in the Gaynor Cup in University Limerick and her own experiences emphasise how important it is for young girls to have role models to aspire to emulate.

“I started coaching at 14 because I had no team to play with where I lived in Drogheda. I started coaching because I wanted to be involved in football. My dad was going on a coaching course, Sean McCaffrey was the DO for Louth, Meath, Cavan, Monaghan so I went along and Sean really encouraged me to get involved with a team and not just finish when the course was over. I started coaching the underage boys with Albion Rovers, my local team at the time and I’ve been coaching since then.

“I was never going to be a great player because I didn’t get the chance to play with a team until I was 17 and going to college so I said I’m going to be a football coach. Everybody just laughed at me and said ‘no, you can’t’ and I said, ‘well I can actually’. I wasn’t sure if I could to be honest but I just said I could.

“When it got close to the Leaving Cert and it was time to start making decisions I got a bit of a break because Packie Bonner was going around the country at the time promoting the four year technical plan for the FAI. He came to Drogheda and gave a presentation to the Drogheda League and I was there. He told us that the FAI were going to be putting development officers in each county over the next four years. I thought that was perfect timing for me, I’d be out of college in four years so I wanted to do something to help me get that job so I did sports science in UL and then I did eventually get that job.

“When I was in school I was saying that I was going to be football coach and teachers were telling me ‘well obviously you can’t do that, you’re a girl’ and I said ‘well actually I can, who is going to be the first?’ Not that I was the first, there were other female coaches out there, I just didn’t know about them. There has to be somebody there to aspire to for young girls. This is the chance for them to see this World Cup – they will see the crowds in France, the stadiums that they will be playing in and it might just inspire young girls to say that they do want to be a footballer,” said Cusack.

As well as promoting the game to young, aspiring footballers, Cusack thinks that any casual football fan, who may not have seen much women’s football before, will be pleasantly surprised at the quality of fare on offer

“TG4 are great for promoting sports. They have given boxing great coverage and they would have a lot of women’s football too.

“Even people who might not go out of their way to watch it will see it because it is on television and they will get sucked into it I hope. It just changes people’s perceptions and hopefully they will see that women’s football can be top class as well.

“I’m hoping that this tournament will open people’s eyes because the quality of it will be brilliant and I’m really looking forward to it. I suppose there is an older generation who aren’t used to watching women’s football but it is so important for the younger generation to be watching it. Those under 13s that were in Limerick last week hopefully will be tuning in. It would be great if they were watching the Irish team playing but if Ireland haven’t qualified then at least they will get to watch the global superstars of women’s football,” said Cusack.

On the pitch, France will be expected to start the tournament off with a win against South Korea in Paris and Cusack is tipping them to impress in this tournament but says it’s hard to see too far past the holders USA and two-time winners Germany for potential champions.

“The USA are the ones to stop really, they are champions and look so strong again. I think the teams that will be there at the end will be USA, Germany – Dzsenifer Marozsán is one to watch there, she is a midfielder in her prime at 27 and is quality.  France, I think, will do very well, they have a lot of players from the Champions League winners Lyon. I think England will do quite well, I don’t think they’ll win it but they could reach the semi-finals. They have players like Toni Duggan at Barcelona and Steph Houghton who is captain,” said Cusack, but there are players away from the favourites who will be worth watching too. 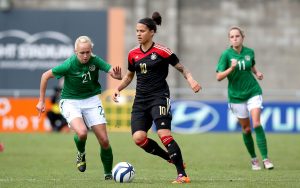 Laura Cusack is tipping German midfielder
Dzsenifer Marozsan to be one of the players of the tournament
Photo: ©INPHO/Ryan Byrne

“Sam Kerr plays for Australia, their centre forward and captain, she has already played at two World Cups even though she is only 25, she is a cracking player. Then there are the older players like Marta for Brazil, she is still going at 33. She is still looking to win it, I don’t think Brazil will win it because they are an ageing team but they are always great to watch. There is no expectation on Brazil because they are that bit older so you never know, they could pull off a surprise.

“France could be the ones to go further than they have before, the host nations always go well and they will be well supported but USA and Germany have to be the favourites,” said Cusack.

Either way, it promises to be a fantastic festival of football over the next month that will hopefully entice a whole new fanbase to women’s football before it culminates with the final in Lyon on 7 July.