SOUTH Kildare has a good reputation for producing blooming great Roses. Charmaine Kenny and Clare Kambamettu won the coveted Rose of Tralee title  in 2009 and 2010 respectively (both representing London).

Carrying the Lilywhite hopes in the  iconic Dome in August  will be Emer Fogarty (24).

From a field (or should I say flowerbed) of 24 fragrant stems cultivated in the Westgrove in Clane Emer was plucked as this year’s Kildare hopeful in world famous contest.

For anyone who thinks this was just a stroll in the park where one would just turn up and smile, there is a lot more expected of potential Roses  than that.

“We were there for the entire day,” said the Kilgowan native.

“There were interviews and group sessions, before having the night for the formal affair, “she pointed out, although without a scintilla of complaint.

“It was great fun, though. The time flew when you’re in the middle of it,” she said.

The Kildare Nationalist enquired how she got involved and the St Laurences’ clubwoman explained.

“I was approached last year [by Donal Mahon of the Newbridge Parish Centre] and decided against, but this year I decided I would,” she said simply.

And we are glad she did because Emer’s pedigree is almost tailor-made for the competition. The former Cross and Passion, Kilcullen old girl went to NUI Galway where she graduated in Applied Psychology four years ago. 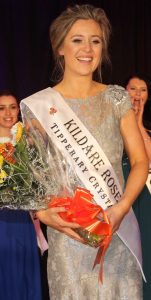 Since then she has been busy developing psychometric HR tests for a major media firm in Dublin, whilst in the meantime won an All Ireland medal with Kildare women in 2016, set up her own yoga business, and sings a mean rendition of that old wistful reminiscence – The Parting Glass.

“I’ve always been passionate about health and wellbeing, and the yoga was something I always wanted to do,” she explained.

Her specific brand – called Rise Yoga – is mobile and allows Emer to go and visit her busy clients on their terms.

Refreshingly, Emer looks at the competition a little differently.

“When it was mentioned I saw it as an opportunity to be challenged. I met loads of girls from different backgrounds , and I was genuinely shocked the standard was so high,” she declared.

Like all contestants she claims a winners’ modesty on the announcement: “You’re going to assume it’s not you because of the amount of girls”, but came quickly back to earth with her ambition for Tralee, “We’ll do our best to get round Daithí,” she laughed.

If the whole day in Clane sounded like a bit of a chore, then the final in Tralee is a misnomer, because it is a fortnight of appearances all over Ireland, culminating in the two nights below in the Kingdom.

“We do have to get sponsored for outfits,” she admitted.

“We’ve had a few people on already, but I still have to choose what’ll work best for me,” she said.

The Kildare Nationalist then asked obvious question – about the Father Ted effect – and her answer was very honest.

“Yes, it can be perceived that way, but one of the things that struck me [in Clane] was the judges. They were very grounded women that people would be inspired by,” she said.

“It’s a huge platform to elevate a career  [Aoibheann Ní ’Shúilleabheann, 2015-RTE; Maria Walsh, 2014 MEP],  and I’d see it as something women could aspire to,” she added.

“I want to be a role model for young women to be like. I was speaking to Anna Geary (Cork hurler, and former contestant), and she said it was a wonderful experience,” said Emer.

“We’re creating empathy, a new network that’s global, and it’s great to celebrate with these girls,” she added.