Michael McWey – Kildare to the core

KILDARE bade farewell to its longest serving politician last week when former councillor Michael McWey died on the day of the local elections.

Michael, who was 88 years old served an astonishing 44 years on Kildare Co Council between 1954 and 1998, and did four terms as chairman during this tenure.

The Kildare town native spent his life in the family home and business Round Tower House – where his father Tom ran a pub, a store, an undertakers, and a haulage firm before Michael took the reins in the early ‘50s.

Along with all this he got himself an auctioneer’s licence, a job he worked in up to a couple of weeks ago. 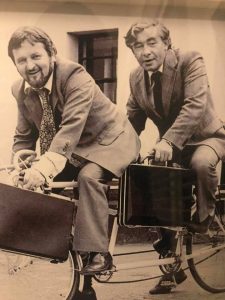 An old boy of Knockbeg College with whom he won a Leinster Colleges title in 1949, he went on to play minor and junior for Kildare, and won a county title with Round Towers in 1956.

He was also a former captain and president of Cill Dara Golf Club, whose clubhouse was re-developed under his watch.

It is believed he got his love of politics from his grandfather Michael Cunningham, who was a councillor in Kildare back at the foundation of the State.

As a councilllor Michael was the driving force behind the development of the Kildare Village retail outlet, as well as the twinning of his home county with that other great equine centre Lexington in Kentucky.

He also sat on the State’s Valuation Tribunal, travelling the length and breadth of the country in this capacity.

He was an avid reader and amateur historian, and was able to recall a wealth of stories from his vast experience.

“He will be sorely missed, especially by his grandchildren. There’s a big void, and we will miss his wisdom and wit,” said his son Michael Jnr.

“He was a great source of knowledge and a mentor to me,” said his friend and colleague Seán Reilly.