KILL man Seán Smith, CEO of Micron Agritech, is one of four students at Technological University Dublin (TU Dublin) who have invented a portable kit for testing parasites in animals.

The brainchild of Seán and fellow third-year Product Design students Tara McElligott, Jose Lopez and Daniel Izquierdo, who co-founded Micron Agritech, Tástáil is aimed at providing farmers with a quick and easy way to test for parasites without the need for veterinary intervention. 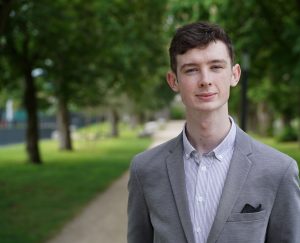 “We’re delighted with Team Micron’s ongoing success,” said Dr Colm O’Kane, chair of the Product Design programme at TU Dublin. “In our multidisciplinary Product Design programme, we aim for projects to be desirable for the user, technically feasible, and viable from a business standpoint, and it’s great to see this multifaceted approach continuing to develop pioneering innovators and entrepreneurs like the Micron Agritech team.”

Tástáil reduces the waiting time for results from days to minutes, allowing for quick and easy testing. It’s creators have said that by increasing the amount of testing farmers will only be dosing animals that actually have an infection and that overall this will reduce the amount of medication used in the agricultural industry (and help with medication resistance).

While it uses technology based on machine learning algorithms developed by TU Dublin’s School of Computer Science, it’s designed to be simple to use – farmers insert a prepared faecal sample into the device and will then receive a text message with their animal’s status.

Speaking to the  Kildare Nationalist , Seán explained that they discovered the potential for Tástáil through market research and then began talking to farmers and vets. The concept of simplicity, he said, was a major focus in developing the idea.

“There’s an awful lot more farmers testing their animals at the moment, but they have to take a sample from their animal, or several samples from across the herd,” he said. “Then they have to package it up and post it off to a lab, there’s several around the country that do that, whether they do that through their vet or on their own… you’re waiting three to five days, sometimes more, for the results to come back.”

The reaction from the agricultural sector so far has been good, Seán noted. They have visited several farmers, mainly around Kildare, with a demonstration model and “most farmers have responded well and shown us they understand the process and how to use it very quickly”. The next step is focusing on developing the product fully and then bringing it to the marketplace.

“That’s what we’re working on at the moment,” said Seán, “every day getting it a step closer so that we can actually launch it and bring it to the farmers of Ireland and then hopefully across the world.”

More information and a video demonstration is available on micronagritech.com.