ADAM TYRRELL says he’s confident the game against Dublin will serve as a major boost to Kildare’s prospects of making the Super 8s stage of the championship. 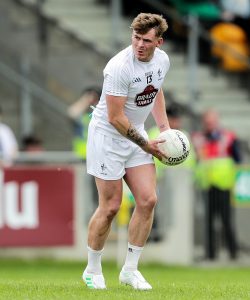 Despite finishing 15 points adrift of the five-in-a-row All-Ireland title chasers, Tyrrell feels that he and his teammates will have learnt a huge amount from the Leinster semi-final contest.

And in the aftermath of the Croke Park result, Cian O’Neill’s side face a second round qualifiers’ clash at Corrigan Park against Division Four side Antrim, who pulled off a shock 2-16 to 1-11 win over Division Three opponents |Louth, in their first round qualifiers clash at Drogheda.

“Of course, we were very disappointed to lose by a big margin, but on the positive side we know that we can play much better and we now know the areas of our game where we have to improve,” said the pacey corner-forward who continually tormented the Dublin defence in the Headquarters tie.

“Myself and a few other lads missed a few good chances against Dublin, and we will be aiming to cut down on those errors in the remaining matches that we will have left in the championship.

“Playing against a team of Dublin’s ability and experience is a huge bonus for any opposing team and we are now a much more battle-hardened lot of players than we were before the Leinster final.

“A lot of teams make the mistake of standing off Dublin too much, but we went on the attack straight from the throw-in, and this policy helped us to keep in touch with Dublin and to be still in the hunt at half-time (four points down), “ added Tyrrell, who shot four points, three coming from open play.

Turning to the contest against the Saffrons, the Moorefield clubman said: “At this stage of the championship, there’s no more second chances so we’ll be going hell for leather in the Antrm game.

“But Antrim won’t want to roll over either, and they won’t be lacking in confidence after their win over Louth.

“So we’re expecting a very tough match and it certainly won’t be easy to come away from the North with a win. However, we’re very determined to reach the Super 8s so it’s vital that we get back on track after the way the game against Dublin went,” he added.

And the Antrim defence can anticipate a very demanding 70 minutes, if Tyrrell and full-forward Ben McCormack replicate the outstanding way they teamed up in their battle against the Dublin rearguard.

“After being out for a while with a hand injury, Ben is playing great football at the moment, and he really terrorised the Dublin defence”, said the Kildare No 13 on his fellow Newbridge native, but Sarsfields’ clubman, who shot three points and set up two goal chances for himself.

“Since we’ve been playing together in the full-forward line, the two of us have developed a good understanding between us. Ben is a very easy player to play with, as he always makes intelligent runs and makes himself available from passes from myself and the other forwards.”A debutant on the Kildare senior side in 2016, 26-year-old Tyrrell only resumed inter-county action this year, having missed out on the 2017 and 2018 campaigns.

“I was due to go away on army duty to the Lebanon early in 2017, but then the departure date was delayed until November that year,” he explained on his absence from the Lilywhites’ set-up two years ago. That meant that I was away from my then two-year-old daughter for the first time, including at Christmas, and I didn’t finish up in the Lebanon, which was a great experience seeing a different culture, until May 2018. When I came home, I wanted to spend as much time with my daughter as I possibly could but when I was asked back into the Kildare panel this year, I jumped at the opportunity as it’s any young lad’s childhood dream to play for your county.”