RATHANGAN solicitor Cllr Mark Stafford (FG) is the new chair of the Kildare-Newbridge Municipal District, with newcomer Peggy ODwyer (FG) as his deputy, following their selection at the first meeting of the new group in Áras Chill Dara earlier this week (June 12).

He was nominated by his party colleague and newcomer to the chamber Cllr Kevin Duffy from Monasterevin, and seconded from across the floor by Cllr Robert Power (FF), previously of the Naas bailiwick.

Cllr O’Dwyer, a nurse from Newbridge town, was nominated by her fellow newbie and namesake Tracey, and seconded by county Cathaoirleach Cllr Suzanne Doyle (FF). 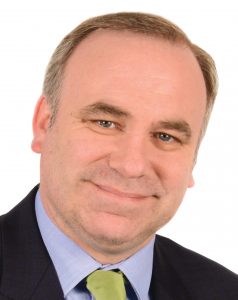 Refreshingly, women are in the ascendancy in this District, with six members, to five men.

“I would like to congratulate each and everyone on their election, especially Cllrs Heavey and McLoughlin Healy on topping the poll, and Cllr [Anne] Connolly who came within a whisker [15votes] of a quota on the first count! I did all I could for you, Anne!” said Cllr Stafford.

He then paid  tribute to the six councillors from the last MD who either stepped down or weren’t re-elected to this iteration – Mark Lynch, Joanne Pender, Murty Aspill, Morgan McCabe, Paddy Kenendy, and Sean Power.

He then recalled former Cllr Power (FF) as a TD.

“You don’t get to be a Minister of State without developing a certain steeliness – the iron fist behind the velvet glove, [yet] kind and courteous to all,’ he said.

“Paddy Kennedy was a gentleman to his fingertips , and aided all colleagues of all parties and none,” he added as an example.

“Existing (sic) councillors will offer their assistance to the new councillors, because we know it can be daunting. My door will always be open,” he concluded.

“I suppose it’s a surprise,” said Cllr O’Dwyer after her nomination was accepted, “but we now have both gender and geographical balance,” she noted.

With a background in healthcare she suggested the coming years would be “a learning curve, but I hope to work for the greater good”./