Kelly back in an Ireland jersey at World University Games

AFTER representing her country at under 17 and under 19 level, Lauren Kelly took the next step on her journey to hopefully one day getting a senior cap by being named in the 20 woman squad for the World University Games in Naples, which get underway at the start of next month. 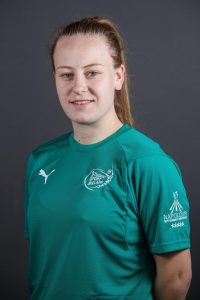 Talented Kelly, who also had a spell with the Kildare GAA ladies team at the start of the year, enjoyed a brilliant year of college football with Maynooth University and her form for her college has yielded two benefits. It helped her make the final cut for this Irish squad but also, while on trial she was spotted by Wexford Youths manager Tom Elmes and she was snapped by the team that won the Womens National League and Cup double last season.

“Last year I don’t think it was taken as seriously as it should have been. Barry (Prenderville) in Maynooth has changed everything around. He has brought in new incentives and has clamped down on training and stuff like that. It’s shown massively because we went on and won the league and only missed out on the double by losing on penalties. 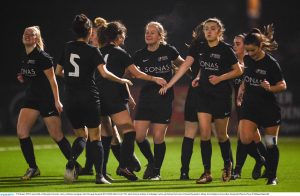 “It was after the trials for the college team that Tom from Wexford rang. It was a clean start for me and that was what I needed, and of course there is the Champions League as well. Things are going really well at Wexford, to be getting 90 minutes every weekend is ideal for me. We are doing well so far,” added Kelly, who played for DLR Waves in the National League last year.

When Kelly began the trials process, Irish senior team manager Colin Bell was in charge but other commitments meant that he stood down and Kelly’s former underage international manager Dave Connell took over.

“Colin was over the team when we started trials in January and after about three trials he narrowed it down to 25. He couldn’t commit for the summer because he is at the World Cup now so he stepped down and Dave Connell took over. He brought in a few others but in general kept the same squad and that was eventually cut down to 20.

“When I played under 19s he was the manager. I played with them for two years so I’d know Dave well. He would managed most of the squad at some stage, most of the team would have been underage internationals,” said Kelly.

Although she has plenty of underage international experience, the competition will be a first chance to play against opponents outside of Europe after Ireland were pitted in a group with Brazil (2 July, 9pm) and South Korea (4 July, 6pm). After a couple of years away from international recognition, it’s a chance she is relishing.

“I missed out on the last tournament at under 19s when I broke my ankle so it’s about two years since I was away playing for Ireland. It’s good to be back because you do miss it. When you are underage you have games every year and if you miss a year at under 17 it’s fine because under 19s comes along the year after. But when I missed out on my last year at under 19 I was wondering would there be another year because trying to break into the seniors is very tough. This is the next step for that and is a step in the right direction. I don’t think it’s anything to look down on, it’s a good chance and the standard will be good too. We will play Brazil and South Korea in our group, you always get a good standard from both of those teams.

“It’s different because at underage international we are always playing European countries, I’ve never played against a country from outside of Europe so it will be interesting to see how they approach things,” said Kelly.

Even though her club’s chances of retaining their league title suffered a blow last weekend when beaten by Peamount, it’s an exciting time for Wexford Youths with the draw for the Champions League coming up next week as well. Kelly is hoping that these sort of high profile games can help her fulfil her ultimate goal of a senior international call up. 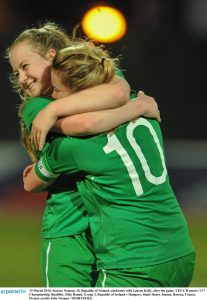 Kelly celebrates a win for Ireland’s underage team. She is hoping that representing her country at the World University Games is the next step featuring for the senior team
Photo: Eóin Noonan / SPORTSFILE

“I’m well aware that I have a long way to go, I know myself that I have a lot to do if I am to break into it but this is a step in the right direction. As well as trying to help the team and myself, I’m sure these games won’t go unnoticed, Colin will be aware of what is happening and will be paying close attention to what is going on over there. I hope I can prove myself at Wexford as well, they are at the games, they are always watching so if I can keep on improving then that is the next step,” she said.