Kildare safely through to Round 3 of Qualifiers

KILDARE moved safely into the draw for Round 3 of the Qualifiers after a comfortable win in Corrigan Park on Saturday afternoon. 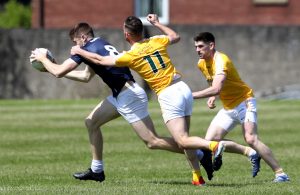 Kevin Feely on the ball during Kildare’s win over Antrim
Photo: ©INPHO/Declan Roughan

Cian O’Neill’s team played with a slight wind at their backs in the first half but clearly arrived in Belfast determined to make a statement about their intentions for the rest of the season as they ruthlessly exposed the home team.

With Neil Flynn and Adam Tyrrell contributing nine points Kildare led by 0-13 to 0-6 at half time.

They didn’t let up after the break and Fergal Conway netted his second goal of the Championship summer with a well worked effort in the 40th minute.

The game played out with Kildare completely on top and they could even afford to play the last 10 minutes with 14 men after Flynn was withdrawn as a precaution after picking up a knock after all their substitutes had been used.

Kildare now await Monday morning’s draw to see which of the Round 2 winners they are paired with.