Kildare beaten at first stage of Leinster U20 Championship

KILDARE’S reign as Leinster and All-Ireland U20 champions was ended at the first hurdle on Tuesday evening as a well-drilled Laois recorded a deserved win. 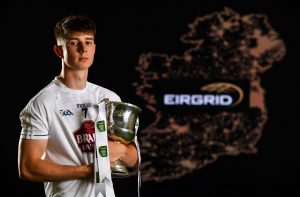 Kildare captain Darragh Ryan was part of the team beaten by Laois in the first Round of the Leinster U20 Championship
Photo: Sportsfile

Laois scored the last three points of the first half and first four in the second as the brilliant Diarmuid Whelan led the home defence a merry dance.

The visitors extended their lead to six points during the second half before Jack Cully pulled back a point in the 60th minute.

Kildare were awarded a penalty in the fifth minute of injury time after James Burke was pushed in the back and Luke Griffin stepped up to convert but Whelan was to have the final say and his score completed the win.

With no back door in the competition, Kildare crashing at the first stage while Laois set up a quarter-final Westmeath next week.