SATURDAY sees the first Dubai Duty Free Irish Derby since the Curragh was newly refurbished but the famous racetrack may see that new roof lifted off if Madhmoon can deliver a win for popular local trainer Kevin Prendergast – and Johnny Murtagh believes there is every chance of that happening. 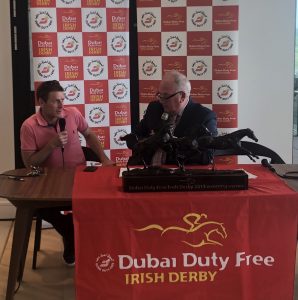 Madhmoon ran a superb race race to finish second behind Anthony Van Dyck at the Epsom Derby at the start of the month but Murtagh believes Prendergast’s horse can reverse that result.

Not that it is going to be easy and Aidan O’Brien’s battalion will start as favourites with Anthony Van Dyck looking for a Derby double, and Broome not far behind him in the betting.

“I’d see Broom and Anthony Van Dyck as the number ones for Ballydoyle. It’s going to be tough,” said Murtagh.

“It’s going to be a staying race and there will be no hiding place there. But, I was very impressed with Kevin’s horse when he won at Leopardstown last year. I thought he was the best two-year-old last year. He ran well in the English Guineas but was on the wrong side. He ran well staying on and speaking to Chris Hayes afterwards he said that he wants a mile and a half.

“He’s going to have to ride him quiet, it’s four or five against one but if gets a bit of luck in running, I’m not saying he’ll win but he should be there or thereabouts. He just might have a bit more of a turn of foot than the others,” added Murtagh.

Certainly, it’s hard to imagine a more popular winner of the race.

“I just hope that Kevin Prendergast can do it. He’s (almost) 87 but his positivity is amazing and that’s why he is 87. He doesn’t realise he is 87, he thinks he is 57. You meet him on the gallops and he’s sprinting by you. He’s telling you that the jockey went too soon on your horse last week. He knows everybody’s horses.

“He’s the King of the Curragh, he trains just beside me. It didn’t happen in Epsom but hopefully, hopefully Saturday can be his day and there would be nobody more deserving,” said Murtagh.

Were it not for a slight stumble at Epsom, Madhmoon could perhaps have pipped Anthony Van Dyck but Prendergast is happy with how the horse has come out of that race.

“He just stumbled and it put him out of his momentum, and he’s just grabbed the bridle sooner than I wanted and unfortunately he got there a shade too soon. Buy maybe he wouldn’t have run any better if he had been hung onto for longer. Who knows? But he’s absolutely bombing since. He’s in great form, couldn’t be better. I’m not going to say he’s better than he was at Epsom but he should run a good race.

“He’s a good horse, he’s got a good chance. He’s got a battalion to beat but hopefully he will act as well as he did at Epsom and we might get a result,” said Prendergast.

The form line for horses that ran since the Derby suggest it was a strong renewal.

“The horses that ran in the Derby have run creditably since. I think there were two winners at Ascot and a couple of placed horses. Aidan said it was one of the better Derbys that he had horses to run in so hopefully he was right.”

O’Brien’s horses are once again the ones to beat but Prendergast is upbeat about his chances.

“Aidan’s always very formidable in these races. We’ll have those to beat and whatever else turns up. He couldn’t be better and he’s running against the same horses as he ran against Epsom. If he has a bit of luck on his side, he could get the nod,” said Prendergast.

Prendergast knows that with the numbers favouring the Ballydoyle brigade, they will set the tactics but he feels that his horse will be able to handle any sort of race.

“Hopefully he can arrive late on the scene and get to the winning post (in front). Aidan has five or six and they’ll probably dictate the pace, and we’ll go along – as dutiful people do! Whatever way it’s run, won’t affect our horse. If they go steady it will suit him, if they go fast it will suit him,” said Prendergast.

Johnny Murtagh – The Jockey – Against The Odds