Thursday, June 27, 2019
THE Aidan O’Brien-trained Anthony Van Dyck heads a field of eight colts who have been declared for the 154th running of the Dubai Duty Free Irish Derby at the Curragh on Saturday. 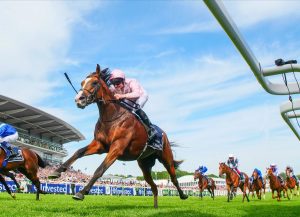 The Epsom Derby hero, who will bid to become the 19th colt to complete the Epsom-Irish Derby double, is part of a five-strong team for Aidan O’Brien who will be looking to make it 13 victories in the country’s richest race which he first won with Desert King in 1997.

The chief threat to the Ballydoyle challenge comes from Madhmoon who will attempt to give veteran Curragh trainer Kevin Prendergast his first Irish Derby victory. A half length runner-up in the Epsom Derby, Madhmoon could well bridge a gap of 29 years for his owner Sheikh Hamdan Al Maktoum who last won this race with the brilliant Salsabil in 1990.

Prendergast said: “The horses that ran in the Epsom Derby have run creditably since. I think there were two winners at Ascot and a couple of placed horses. Aidan said it was one of the better Derbys that he had horses to run in so hopefully he was right.

“Madhmoon is a good horse, he’s got a good chance. He’s got a battalion to beat but hopefully he will act as well as he did at Epsom and we might get a result.”

Dermot Weld and Jim Bolger are both chasing a third win in the great race. The Rosewell House trainer relies on another Hamdan Al Maktoum-owned colt in Rakan who earned his place in the line up when winning the King George V Cup at Leopardstown earlier this month. Jim Crowley will take the mount on the Sea The Stars colt.

The Group 3-winning Guaranteed will represent Jim Bolger as he looks to build on a victory in the Silver Stakes at the Curragh earlier this month. He will aim to emulate Trading Leather who won the Silver Stakes en route to Irish Derby glory in 2013.

Guaranteed will be ridden by Kevin Manning who is the longest-serving stable jockey in European racing.

“The Irish Derby is a fantastic race and one that every jockey wants to win,” Manning explained. “Guaranteed won the Silver Stakes here at the Curragh and he will need to step forward from that but he up to a mile and a half for the first time and we’ve always thought a lot of the horse. It is always a very competitive race but we’ve always held him in high regard and I’d be hoping for a big performance.”