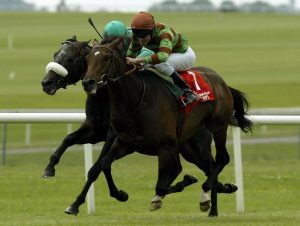 Johnny Murtagh and Alamshar (brown cap) get the better of the Cristophe Soumilon ridden Dalakhani to land The 2003 Irish Derby
Photo: ©INPHO/Getty Images

That was during an injury plagued year for Murtagh and he was feeling going into the race was that his time at the of his profession could be coming to an end. There was an extra edge too with Murtagh on the Aga Khan’s second horse on the day while Christophe Soumillion rode Dalakani.

“The most memorable for me was Alamshar against Dalakhani. The Aga Khan ran two horses that day. I was struggling that year. I got an injury in Ascot and I was only riding on and off. When I won that race I was kind of thinking I wouldn’t be here again. People said to me I was milking it. Maybe I was, but at that time and the way I was feeling I was thinking there wouldn’t be be too many more days like that. Thankfully though, I got over that injury. It was a great battle with Dalakhani and it was special day, the second colours of the Aga Khan beating the first colours.

“They had me in Ireland and Soumillion in France and he was riding Dalakhani. I felt that I was riding for Ireland that day, and in the Curragh there was no way that Soumillion was going to come out on top,” said Murtagh.

Murtagh’s first win came back in 2000 when Sinndar completed the Epsom and Curragh Derby. 18 horses have done the double with Galileo (2001), High Chaparral (2002), Camelot (2012), Australia (2014), Harzand (2016) winning both since that Sinndar win. Anthony Van Dyck could add his name to that list on Saturday and will start the race as favourite.

Murtagh recalls being more nervous than ever before ahead of Sinndar’s run at the the Curragh. 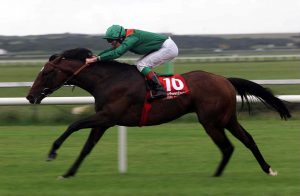 “Sinndar won the Epsom Derby and was coming back to the Curragh and I have to say, it was probably the most nervous I ever was before a race. I didn’t really get nervous but I remember thinking the night before, ‘Jesus, if he doesn’t perform here, maybe they’ll think he was a lucky winner at Epsom and wasn’t good enough’. There was a bit of pressure on that day, there was a million bonus that year too if you won the Epsom and Irish derby. He looked in a bit of danger coming down the hill but he was a great stayer and won by nine lengths, so pretty easy in the end,” said Murtagh.

Both those wins were for John Oxx and Murtagh then added two wins for Aidan O’Brien in 2009 and 2010 to his CV. 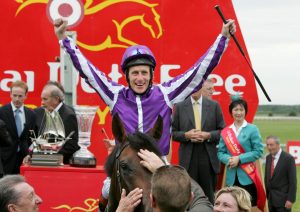 Murtagh almost passed up the ride on 2010 winner Cape Blanco and would have only for O’Brien’s advice. 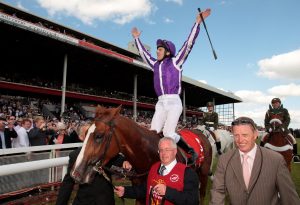 The Curragh crowd salute Murtagh after his 2010 Dubai Duty Free Irish Derby win on Cape Blanco – but the jockey credits Aidan O’Brien with his decision to ride the horse
Photo: ©INPHO/Morgan Treacy

“The story behind that was that I rang up Aidan and said that I really wanted to ride the Galileo, he said ‘Which one? They are all Galileo’. I can’t remember the horse’s name but he came second (Midas Touch), and I said I wanted to ride him. Aidan said ‘No, no, if you want to win the Derby then you ride Cape Blanco’.

“I said I’d think about it and ring him in an hour. I rang him back and said ‘Aidan, are you sure? That other horse is working well’.

The festival still holds a place dear to Murtagh’s heart.

“I was in Ascot last week and that’s a huge week for English racing with everything that goes with it but Derby weekend is our biggest weekend. There’s great racing, there’s the Pretty Polly on Friday, the Derby on Saturday. There’s three days and they are the biggest three of the flat season. All the best horses run, as a trainer you want to have runners on Irish Derby weekend. It’s hugely important for Irish racing. Dubai Duty Free is a huge international name and it’s great to have them back on board and it’s more than just a sponsor, it’s all the other events they run behind it. There’s a huge investment and they deserve every bit of publicity they get.

“These are the days I miss (as a jockey), I missed Ascot last week and I miss Derby weekend at the Curragh but there are a lot of other days in between that I don’t miss,” he said.

Now a successful trainer, Murtagh has five runners in the Curragh over Friday and Saturday with Urban Beat on Saturday perhaps given the best chance of winning.