THE KDFL womens team lifted the Angela Hearst Cup in University Limerick after a dramatic 4-2 penalty shoot out win over the Wexford League. 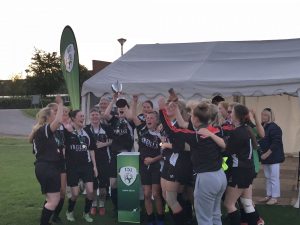 Celebrations start for the Kildare team

Goalkeeper Aimee Keane was eventually awarded player of the match for her performance and she made a crucial save in the shoot out. Kildare were foot perfect under pressure from 12 yards and Amanda Duffy, Brooke Dunne and captain Jessica Turner all scored before Sinead McBride kept her cool to score the decisive kick.

The game during normal time was a closely fought encounter. With chances from open play at a premium, Kildare’s best opportunities came from Turner’s set piece deliveries. Dunne headed narrowly over in the 38th minute after a short corner to Stacy Harris but Kildare got it right in the 44th minute when Turner picked out Dunne at the back post and the midfielder powerfully headed home from close range.

Wexford equalised nine minutes into the second half when centre half Laura Stafford forced the ball home after a free into the Kildare box.

Wexford had slightly the better of proceedings but found Keane in top form. She was off her line quickly to make a number of saves, most notably in the 69th minute when she dived at the feet of Sarah Siggins.

But it was Kildare who went closest to a winning goal in normal time. Again it came from a free kick, this time a delivery from Dunne on the left wing which was met by Harris and only a wonderfully athletic save from Wexford goalkeeper Megan Butler kept it out.

Impressive midfielder Orlaith White headed just over from another Turner corner late on but the game went to extra time.

With the Kildare defence marshalled by Joanne Kelly and Sarah Lloyd O’Neill, and the midfield bolstered by the introduction of the experienced McBride, Kildare looked strong throughout the extra time and the game finished 1-1.

That left penalties to decide the game and it was Kildare who held their nerve in the shoot out. 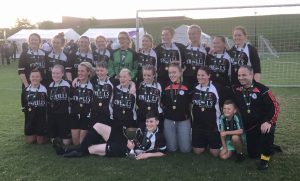