THE draw for Saturday evening’s Round 3 Qualifier could hardly have been tougher for Kildare but at the same time, Sean Cavanagh probably didn’ too many thanks from his countymen after he pulled out the ball to send Tyrone to St Conleths Park on Saturday. 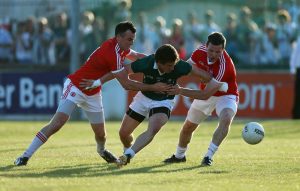 One man whose attention was caught by Monday’s draw more than most was Cavanagh’s former team mate Cathal McCarron. The former All-Star nominee retired from county football at the end of last season and is now concentrated on his club football with Athy and family life with his partner Niamh and his little girl in Kildare.

McCarron played for Tyrone in Newbridge in the last Championship meeting between the teams at St Conleths Park in 2013 and he knows his team are in for a tough game.

“I’m sure the atmosphere will be electric again and there will be a great atmosphere there and a packed crowd. Looking at the weather, it looks like a cracker of a weekend and it is going to be very hot. It’s going to be a real dogfight of a game and there won’t be more than two, three, four points between the teams,” he said.

Like most Tyrone supporters, he is hoping that the best is yet to come from his county.

“Tyrone haven’t been firing on all cylinders yet this season but a draw like this should wake them up. I don’t think they’ll be coming to Newbridge thinking this is an easy game at all. Knowing Mickey and the lads, they will be well prepared,” said McCarron.

Mickey Harte’s team drew plenty of criticism for their performance during their Ulster semi-final defeat to Donegal but McCarron believes that Tyrone’s ambitions extend far beyond their province this year.

“I still think Tyrone are looking at the bigger picture and are looking down the line to see how they can beat Dublin. You see Donegal and they are still playing a real defensive system and I don’t think that’s going to beat Dublin. I think Mickey has been working on this for the last number of months, and even the last year. I know you shouldn’t really be looking down the line but I think that’s ultimately what they are looking for. It will be no cakewalk for Tyrone in Newbridge and it will be very tough actually.

“I think they were caught a wee bit in the Ulster semi-final maybe thinking Donegal were going to be a bit more open than they were. Once Donegal got into a lead they were very hard to peg back. I think it will take Tyrone a good few games to get up and going but if they can navigate the Qualifiers like they did last year…I remember last year in Navan against Meath, we could have well ahead by half time, we missed a huge amount of goal chances and could have been ten points up at half time. The longer Meath were in the game, though, the more belief they got and it became a real dogfight. It was a miracle we got out with a win in the end because Cathal McShane kicked an equalising score when it was about five seconds over time. That was how thin a line it is between being caught in the Qualifiers and reaching an All-Ireland final,” he said.

Tyrone will be well aware of what happened Mayo in Newbridge exactly a year previously and because of that McCarron feels they will be better mentally prepared.

“Kildare beat Mayo last year and had that ‘Newbridge or nowhere’ mentality but I think Tyrone will be well prepped for it. I would like to see, and I think everybody in Tyrone would like to see, the real Tyrone pop up and play the football they can play and this is the sort of draw that will wake them up,” he said.

This is his first season of retirement but it was only really during the Donegal game that he felt that itch to pull back on his county jersey and he will be happy enough to be watching from the terraces on Saturday.

“The game against Donegal was the first time it really hit me. When you look at the overall scheme of things and what I was doing to get playing, I’m quite happy to sitting watching them. The commitment was too big for the playing side of things and I’m actually really enjoying being away from it for a while and enjoying family life and club football. You do miss it but I’m not missing it as much as I thought I would,” he said.

The draw means divided loyalties in the house and ensured an interesting week at training with Athy.

“Niamh is almost a Tyrone supporter at this stage because she has been to so many matches to support me, she has been up to Ulster finals and stuff like that.  There will be plenty of slagging and craic with the lads during the week but at the end of the day I’m a Tyrone man and I’ll be wanting to see Tyrone win even though I’m living in Kildare. The craic will be good and there will be a bit of banter and that’s what it is all about,” said McCarron.