GLORIOUS weather greeted the early starters in Lahinch Golf Club for the Dubai Duty Free Irish Open and Naas golfer Conor O’Rourke will be hoping that weather holds up until he gets out onto the course in the afternoon. 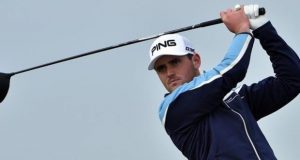 O’Rourke is in fifth last group of players to take the course and tees off alongside Scotland’s Craig Forrest and New Zealander Jake McLeod at 3.10pm.

“It was a big weekend and I had it marked down in the calendar as one to prepare for the year so I was delighted with how it went and how I managed myself and handled my game. It was good to do it in tough conditions as the weather was tricky,” O’Rourke told the Kildare Nationalist’s Robert Cribbin earlier in the week.

O’Rourke played a solid first round last weekend and finished with a two under 70 and then surged up the leaderboard on the Sunday with a best on the day four under 68.

The European Tour event will O’Rourke’s biggest to date but he is determined to seize the moment and make the most of his opportunity.

“This will be by far the biggest event that I will have played in so far, I’d a nice amateur career but since turning pro this will be the highlight and its great to get into it but I’ve aspirations to capitalise on it and not just make up the numbers”.

“It’s something that every young Irish Golfer wants to do growing up and to get to it is great but I do want to do more than just get there. I want to really take part in the event,” he said.

While O’Rourke will be up against some of the best golfers in Europe he does have the advantage of knowing the course in Lahinch and has some good memories there.

“On a course that sets up like Lahinch it probably favours Irish Golfers and people that have played a lot of amateur golf would have played there a lot, including myself. I was beaten in an amateur final there a couple of years ago so I’m comfortable with the course and the surroundings and if you gave me a place to play it would probably be high on the list but at the same time it’s a case of turning up and performing as well as I can.”