Monasterevin dancers are living the dream

A TROOP of young performers from Monasterevin’s Morrissey School of Irish Dancing were among the many Irish dancers who took part in a 12-hour Riverdanceathon in Dublin recently.

The event, which took place between 10am and 10pm on Thursday 20 June outside the Gaiety Theatre, raised awareness and much-needed funds in aid of the Irish Motor Neurone Disease Association (IMNDA). Members of the Riverdance cast also took part and performed throughout the day, and the young Kildare dancers had a chance to meet and take photos with them.

“They couldn’t have been any nicer,” Michelle Morrissey from the Monasterevin school explained, adding that it was great to see the dancers enjoying themselves and showcasing their skills and that they got a great response to their routine. “We have kids now coming home telling us that’s what they’re aiming for, their aim is Riverdance. So it was a dream come true for them.

“All the cast were on the sides looking at them, they were all high-fiving them coming back in, telling them how amazing they were.” 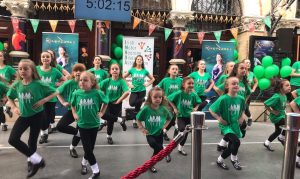 The Monasterevin dancers performed the same routine as they did during a memorable trip to Disneyland Paris in late May – they previously sent in an audition tape and were subsequently invited to perform at the Videopolis auditorium. Unsurprisingly, the experience there went down a treat with the kids who raised the roof at the iconic resort – it’s not too often you get the chance to take to the stage at such a magical place.

“They were amazed by it. The kids all worked so hard for it,” said Michelle, who noted that they have a group of parents who are fully onboard and fully support the young dancers. “They were made up. They had a ball over there… people [waited] around after to congratulate the kids and tell them how amazing they were. They all felt a million dollars – they were nearly getting their autograph books out to sign them for people!”

With two huge performances under their belt, the next important outing for the Irish dancers will be at Monasterevin StreetFest – the first of what is hoped will be an annual festival on the streets of the town and which takes place on Sunday 14 July.

“That’s their next big performance out,” said Michelle.