Hard work in the winter pays dividends in the summer

SPEAK to Kildare players of a certain vintage and they will recall the days of endless runs around the Curragh with a perverse fondness. 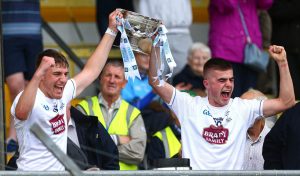 With Micko cracking the whip, early weeks of the season were not spent honing their crafts with the ball, it was spent doing lap after lap after lap of sometimes Hawkfield and often the Curragh. The old story goes that when the players wanted some variety in their training, Micko told them to turn around and run in the opposite direction.

Micko wanted his players to be fit but more than that, he wanted to know which players he could trust to go to war in the heat of battle. It was tough, it wasn’t for everybody and it broke many a player but Micko knew that the players who were left would run through a wall for him.

As well as the physical pain, it was a form of mental torture as Micko built the fittest team around with an unshakable bond between them. It might seem madness for those who weren’t part of it but the players who came through those runs wouldn’t change their time for the world. They knew it served a purpose and they knew it gave them the confidence to match the very best teams in the country.

Training methods have changed markedly since then and the days of such punishing runs seemed a thing of the past but to a man, each player I spoke to after Saturday’s win referenced the month spent at the start of the year without a ball.

“We brought them out to the Curragh to break them to build them,” explained manager Colin Ward.  “It wasn’t going to achieve anything but it was just to see if they had the mentality. Some lads dropped off and some lads had sore ankles and this, that and the other. You knew straight away that they were the lads that weren’t going to make it but the lads that came through…Fitzy (Strength and conditioning coach, Mark Fitzharris) drove them to that point and asked did they want it that bad and in fairness they did want it that bad. That was the starting point. You saw it there today, I think their fitness told there in the end, without a shadow of doubt,” he added.

And the players were delighted that the hard work paid off.

“At the start we were just running, no football and then the football came into it later in the year,” said Eoin Bagnall.

Joint captain Kevin Eustace said:  “That’s all the hard work you have to put in if you want to get to this stage, you have to work hard every single day. All the runs, all the sprints, everything, all worked to this moment right now,” he said.

“All the work we put in down in the Curragh paid off. In extra time it really showed all the work we have put in over the last few months,” added Jack Quinn.

Goalkeeper Cian Burke was thrilled to see the team’s fitness pay off in such style.

“Oh my God, it’s just an unbelievable feeling. Who would have thought this at the start of the year when we started off at the end of December, we didn’t see a ball for a month and a half or something like that, it was just work, work, work. We put the hard work in and Fitzy told us from the start that if we put the hard work in that there was a Leinster Championship there for us. We knew that every other team was beatable, even after this game we’ll go in and reassess the situation and go on and hopefully beat Galway in the next game,” he said.

There are those who view Micko as a dinosaur and a relic of the past with his training methods but speak to those who actually covered mile after mile during the 90’s and they will tell you that he was way ahead of his time in terms of building a team spirit and a fitness that no other team could match. Many would have assumed that progression in the training methodologies would mean an end to this sort of training but Colin Ward wasn’t afraid to tap into that sort of thinking and it paid off spectacularly.