A stunning last 100 metres by Kildare’s John Fitzsimons saw him blitz through the field this morning at the U23 European Athletic Championships in Sweden on his way to finishing second in his 800m semi-final. Fitzsimons was one of three automatic qualifiers from the second semi-final and now takes his place in Sunday’s final. 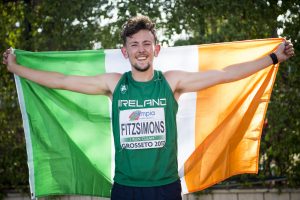 John Fitzsimons celebrates his bronze medal at the U20 European Championships in 2017. He’ll hope to be on the podium again on Sunday Photo: Feidhlim Kelly

Home favourite Andreas Kramer led out the first lap at a fast pace but Fitzsimons stayed with the front group of runners.

With 200 metres to go, Fitzsimons appeared to get bumped on the bend and momentarily lost ground on the front three of the Swede Kramer, the Spaniard Pablo Sanchez-Valladares and the Frenchman Gabriel Tual.

However, the Kildare man recovered superbly on the final straight and eventually finished a comfortable second when pulling up in the last few metres in a time of 1:49.64, just behind Sanchez-Valladares.

“I was expecting Kramer to take it out, he was the firm favourite going in. I said get up near the automatic qualifiers and hang in for as long as possible. In the end it wasn’t even too bad. Kramer died and a couple of other guys behind me didn’t really come through. I was quite comfortable in the end and I’m very happy with it,” he added.

Fitzsimons won a bronze in the U20 European Championships in Italy in 2017 and now that his final place is secured, he is targeting even better in Sunday’s final, which starts at 5pm.

“I came here for a final. Once you are in a final anything can happen. Now I’m here to win, you may get into final first and take it round by round. I couldn’t be any happier,” said Fitzsimons.