Sullivan scores seven as Kildare romp to victory in Limerick

ORLAITH Sullivan scored seven points as Kildare recovered from a slow start in the Gaelic Grounds to eventually begin their All-Ireland series with comfortable win over Limerick. 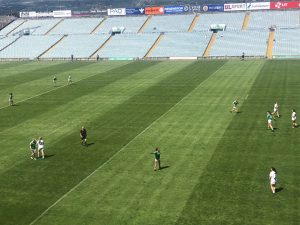 The home side scored two goals inside the first four minutes but after Mikaela McKenna’s goal in the eighth minute followed by a Lara Curran free a minute later Kildare led 1-4 to 2-0 – and it was a lead they held until the final whistle.

Nessa Dooley scored Kildare’s second goal in the 15th minute and all six forwards were on the scoresheet by the 20th minute.

Kildare led 2-10 to 2-2 at half time and used the second half to introduce a number of their younger players from the bench to make their All-Ireland Championship debutS – including Lauren Murtagh, daughter of former jockey and trainer, Johnny.

Limerick pulled back a goal in the 50th minute through a Cathy Mee penalty but Dooley’s close range finish for her second goal five minutes later ensured there was no back for the home side.

Kildare now face Sligo away next Saturday in their second game of the group stages.