AS Ireland’s youngest professional female boxer it’s been an exciting time for Katelynn Phelan since she made her debut last March. 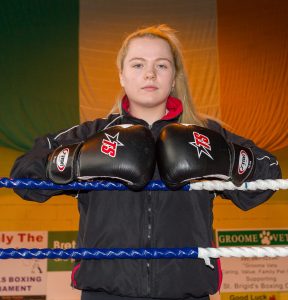 Katelynn Phelan is ready for her second pro fight, her first under the Irish Boxing banner, this weekend in Cork
Photo: Luke Wynne

The Kildare Town teenager signed her first pro deal with promoters Irish Boxing and she will step into the ring for her first fight under their banner on Saturday night in Cork.

“I was looking around at a few people and I emailed and texted a few people to see what the story was and these guys got back to me with the best deal, at the moment anyway. So I am with them for the next three years,” said Phelan when explaining why she hooked up with Leonard Gunning, Stephen Sharpe and co.

Irish Boxing are well known around Kildare as Eric Donovan’s promoters since he turned pro and Phelan was delighted to be linking up with a group that have grown their reputations through a number of successful shows around the country over the last few years.

Although always committed to her sport through her amateur days, Phelan really feels that she has stepped up her training since turning pro.

“I’ve been getting great sparring, with Irish champion Grainne Walsh, Siobhan O’Leary, loads of people. People have been coming to me looking for sparring which is great.

“I’m in proper training camps now. I’m training in St Brigids with my dad and in Unit 3 in Naas with Niall Barrett. I’m training every day, twice a day and working on every single thing that could be worked on. I’m learning all the time which is the main thing.

“I’m learning all different things now. In amateur I kind of just did whatever the coaches told me but now it’s about learning how to treat my body right, nutrition, stretching properly, all that kind of stuff, which is almost more important than the boxing sometimes,” she said.

Given her age and her success through her amateur days, there’s a real buzz of excitement within boxing circles over Phelan as she takes her first steps as a pro. She deserves huge credit for jumping straight in at the deep end and rather than looking to pad out her record by taking on journeywomen fighters, she is taking on experienced girls. Her first fight was against Olympian Monika Antonik and on Saturday she will box 45-year-old Galina Gyumliyska, a Bulgarian who has fought for three world titles among her 52 professional fights.

“Experienced is an understatement for her. She’s boxed Katie Taylor’s last opponent, Delphine Persoon, she has a good few fights and this is definitely a fight where I can show off my talents. She is a three time world title challenger. I don’t want the easy route, I want to go hard. These kind of fights are the only way to gain experience,” said Phelan.

Cork is renowned as a sporting city and with one of their own headlining the night, there is sure to be a huge atmosphere.

“It’s been a long time since there was a pro show in Cork. Noely Murphy is coming back from the States to fight, it will be his homecoming. It’s going to be a big night, especially for me, there’s going to be a big explosion happening,” said Phelan, and she hopes to stay busy between now and the end of the year.

“I’m definitely hoping to get another fight or two in before the end of the year. We’ll see what the story is with Stephen and Leonard and the guys in Irish Boxing and see what they think after this fight,” she said.