KILDARE’S 1-13 to 1-9 win over Galway on 3 February 1985 in St Conleths Park was reason to celebrate as it secured Kildare’s place in the knockout stages of the league but surely nobody leaving the Newbridge venue that day could have imagined that game would still hold a place of significance in Kildare GAA folklore almost 35 years later.

The game was played on the same weekend as the Irish rugby team began what became a famous Triple Crown winning 5 Nations campaign with a 18-15 win over Scotland and just a couple of days before a fresh faced Paul McGrath made his international debut as Ireland hosted world champions Italy in Dalymount Park. 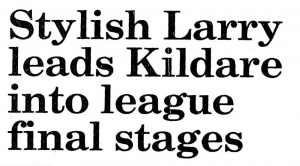 The Nationalist headline in February 1985

Larry Tompkins was the star the show of the show that day, scoring 1-5 of Kildare’s total, but Charlie Keegan of the Nationalist also praised Dave Kavanagh, Bill Sex, Pat Flynn, Shay Fahy, Des Bergin and John O’Rourke for their roles in the win. Although the win hinted at a good year to come it only led to misery as Kildare were beaten by Monaghan in Croke Park by a humiliating 4-6 to 0-2 in the league quarter-final and their summer was also ended at the quarter-final stage in Leinster by Meath.

Tompkins never scored as heavily again in a Kildare jersey but the real reason that this game stands out is that it is the last time that Kildare beat Galway in a senior, under 21/20 or minor game.

Since then, the senior team have tried 14 times and failed. The 11 defeats during that time of course include the 1998 All-Ireland Final, the 2000 All-Ireland semi-final, the 2017 Division 2 League Final and most recently, in the 2018 Super 8 Series. The only chink of light came in one of those three draws when a late Johnny Doyle penalty in Salthill in the final round of league games secured the draw that Kildare needed for promotion to Division 1.

Kildare’s winless streak against Galway outlasts even their run without a win against Dublin but at least with their Leinster rivals Kildare can point to some outstanding underage success, most recently in the Leinster Minor Final.

Underage games against Galway, although rare, have just brought more misery. The likes of Glenn Ryan, Anthony Rainbow, Niall Buckley and Ronan Quinn got a taste of what was to come in their senior career when they were beaten in the 1992 Under 21 All-Ireland semi-final and then a team that contained many of the current Kildare senior team were beaten at the same stage of the 2013 competition. 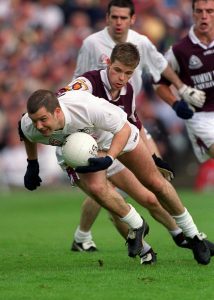 Ronan Quinn in action against Galway in the 2000 All-Ireland semi-final
Photo: ©INPHO/Lorraine O’Sullivan

Saturday’s All-Ireland quarter-final in Longford (throw in at 7pm) will be the first meeting of the counties at Minor level and the good thing for the young team is that such history means nothing to them, manager Colin Ward said as much after their win over Dublin.

They can go into the game in Longford and play with the freedom on youth and given the level of their performance in their win over Dublin they will go into the game full of confidence. The most impressive thing about that performance, even allowing for some superb individual displays, was their mentality. There were various stages of the game, most notably when they trailed by five points early in the second half, when their heads could have dropped but instead, Kildare showed an impressive resolve and never panicked.

That mentality is sure to be tested by Galway. They arrive into this game after losing the Connacht final by a single point after extra time against Mayo but they can’t be taken lightly. Top scorer for them that day, Tomo Culhane, will be well known to the Kildare squad after his time with Clane and he scored 2-3 in last year’s Kildare minor final when his team were beaten by Naas.