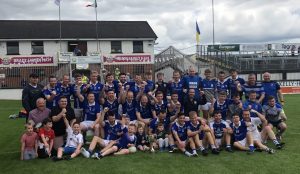 Both sides lost influential figures in the early stages to black cards, Lennie Havens of Monasterevan and Fergal Swan of Sallins, but it was Havens’ replacement, Kevin Mulpeter, who scored the game’s first goal after he pounced on a loose ball in the 15th minute.

Kevin Fitzpatrick and Padraig Nash added points to put Monasterevan 1-5 to 0-2 ahead by the 20th minute.

Sallins were unlucky not to pull a goal back in the 22nd minute when Ben Caulfield’s shot was cleared off the line by Monasterevan corner back and captain, Cormac Stapleton. That missed chance took on extra significance three minutes later when Kevin Dunne sent Paul Maloney through to score second Monasterevan’s second goal of the game.

They led 2-7 to 0-3 at half time but credit to Sallins, they never dropped their heads and scored the first three points of the second half. Monasterevan replied with a couple of points before Sallins scored another three in a row and they were seven points behind with seven minutes to play before another key moment in the game.

Jack Sharkey’s shot was half blocked by goalkeeper Aaron Bannon but still would have ended up in the net were it not for Rhys Heavey’s intervention on the goalline. Just seconds later, Monasterevan broke down the field and Nash set up Cormac Brady for their third goal of the game.

David Foley scored an injury time consolation for Sallins and they also missed a late penalty when Jack Sharkey’s kick was saved by Bannon in the last action of the game.