THE KDFL Senior Division title won’t be decided tonight in Suncroft but either the hosts or visitors Clonmullion could go a long towards doing just that if they can pick up the three points on offer. 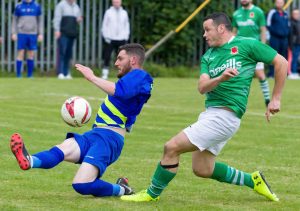 Athy side Clonmullion arrive into the game as league leaders, six points ahead of third placed Suncroft but the 2017 champions and last year’s runners up have three games in hand.

It’s Suncroft’s first league game in almost a month but they have won their last six league games and also had a 10-0 over Galhoy win last weekend in the Ben Moran League Shield to warm up for this crunch tie.

Clonmullion, for their part, have taken the Senior Division by storm this season. They won the Premier Division last season when dropping just two points along the way. They have lost just one league game so far this season but have drawn four games and most recently let a two goal lead last Saturday evening when relegation threatened Rathangan scored twice in the last 25 minutes to earn a 2-2 draw.

The teams have played once already this season when Clonmullion ended Suncroft’s dreams of a third Lumsden Cup in a row with a 4-2 win at at home in Round 2. Suncroft have been busy in the transfer market since then and nobody in Athy will need a reminder of the quality that James Fennell and Martin Brennan possess.

These aren’t the only two sides left in the title race and Naas duo Monread, the reigning champions currently in second place two points behind Clonmullion but having played a game more, and Ballycane Celtic, in fourth place level on points with Suncrot after playing two games more, are right in the mix too.

It’s already one of the most exciting title races in the top flight of the KDFL in many seasons and tonight’s game is just one of a number coming up over the next few weeks that will decide the destination of the trophy.

The game kicks off at 7pm and you can follow the action on the Kildare Nationalist Twitter page, @KildareNatSport.