THIS year’s Big Barrow Splash in Athy enjoyed its biggest-ever crowd, who turned out for a great day of fun for all the family on Sunday.

Organised by the town’s Dragon Boat Club, the third edition of this fantastic event offered a chance for non-club members to experience the excitement of dragon boat racing. On a day when the sun shone and the rain remained at bay until the evening, teams of novice dragon boaters took to the river to test their paddling skills. The Barrow Dragons were ultimately victorious in the Junior category, while South Kildare Macra na Feirme took the Senior prize following a photo finish. 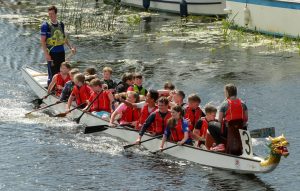 “We are absolutely and utterly ecstatic,” Athy Dragon Boat Club spokesperson Amanda Smyth said of the day, adding that Kildare Rose Emer Fogarty was among those who joined them and took to the water to paddle. “It was our biggest crowd ever in the three years… people arrived about half 10, 11 o’clock and they stayed right through until half past five… it was absolutely amazing.”

Alongside the action in the boats, there was plenty to do and see for all ages, ranging from a surfboard simulator and pillow fighting to stand-up paddle boarding and water zorbs. The river rope crossing returned for 2019, with Joe Wixted the winner in a time of 42 seconds.

The hang tough challenge was among the new introductions on the day, with participants hanging from a bar over the Barrow for as long as possible. Sergio Peisano won the Senior challenge in a time of 2.23 while Ronan Kelly was the Junior champion on 2.58. Amanda explained that they could have run the challenge for three or four hours, such was the level of interest in it. “Everybody wanted to do it,” she said. “It was a huge success.”

With the dust settling on what was a wonderful day, the club has thanked everybody who joined them as well as the competitors who helped make the Big Barrow Splash 2019 such a great success. They’re already looking forward to next year.

“We can’t wait,” Amanda said. “As long as the sun is going to shine again!”