Author James Durney includes a list of names and addresses of some 1,500 internees, which will be fascinating to their descendants and those interested in local history, as well as an exploration and details of the 1921 escape, which was one of the largest and most successful IRA escape in history. 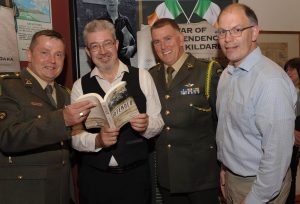 During the War of Independence, faced with an armed insurrection it couldn’t stop, the British government introduced increasingly harsh penalties for suspected republicans, including internment without trial. This led to the incarceration of thousands of men in camps around the country, including the Rath and Hare Park Camps at the Curragh.

*Interned is the first book to tell the story of the men who were held in the camps, which housed republicans from all over Ireland.

Faced with harsh conditions, unforgiving guards and inadequate and often inedible food, the prisoners maintained their defiance of the British regime and took whatever chances they could to defy their gaolers, including a number of escapes. The most audacious of these was in September 1921, during the Truce period, when sixty men escaped through a tunnel.

The book was, appropriately, launched in the museum in the Curragh Camp on Thursdsay 25 July.

Naas native James Durney is a graduate of NUI Maynooth and an award-winning author of 22 books on Irish history. He works in Co. Kildare’s Local Studies, Genealogy and Archives Department, based in Newbridge Library, and was Historian in Residence for Co. Kildare’s Decade of Commemorations Committee from 2015 to 2017.