Leaders of the future

SEVENTEEN young people from Co Kildare joined 250 teenagers from India, the USA and all over Ireland in NUUI Maynooth lastweek for Foróige’s Leadership for Life Conference.

The conference, brought together teenagers, aged 15-18, to learn how to become leaders in their own lives.

During the week-long conference they learned crucial life skills such as empathy, decision making, communication skills, critical thinking and team-work. 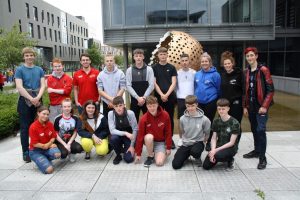 “Great leadership is grounded in respect and the ability to inspire. In the week ahead these young leaders will uncover the greatness within themselves and their own unique leadership style.

“Young people have a greater role to play now, more than ever before, in the issues that really matter. Youth activism and community action is a central part of our Leadership programme, and I’m both delighted and in awe of what these young people achieve when given the opportunity.”.

The Foróige Leadership for Life Programme was developed in Ireland in 2009 and is open to young adults aged 15-18.

Delegates attending have been nominated by youth workers and volunteer leaders from their own countries because they have demonstrated an innate sense of justice, determination, passion and ability to lead and make positive changes in their own communities.