Their league success had seen Naas mentioned as possible dark horses for the title this year but they were frustrated by a Castledermot side who were superbly coached and organised by manger Damian Hendy who eventually won by 0-11 to 0-9.

Johnstownbridge won the second game in St Conleths Park against Clane but almost led things slip. With 37 minutes played, Brian Flanagan’s team led by 0-11 to 0-3 and seemed in complete control but James Behan’s 50th minute goal gave Clane a huge lift and Johnstownbridge eventually limped to a 0-12 to 1-8 win. Robbie Phillips had a late shot to level the game but his effort drifted wide of the post but after losing 6-13 to 0-13 to the same opposition at this stage last year, this represented a big improvement by Clane.

Kevin Feely scored penalties in either half at Athy overcame Round Towers by 2-10 to 0-8. Towers battled hard in the first half and scored the last four points before the break to be just one point behind at the change of ends but Athy showed their quality in the second half. 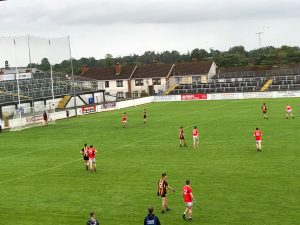 In Hawkfield, Eadestown recorded what could get prove to be a crucial win against Intermediate champions Two Mile House, 2-12 to 1-9, and the House will need to get a result against either Moorefield or Sarsfields in their remaining group games to avoid dropping into the relegation play offs.

In the Intermediate Championship, Kilcock beat Ballyteague by 0-8 to 0-7 and Rathangan overcame Ellistown by 1-15 to 0-13.