ON Thursday last 1 August a group of former soldiers helped lower the Fuschia flag from over Áras Cill Dara, where it had flown for a month to highlight the plight of homeless ex-servicemen.

Every July, Kildare Co  Council allows this worthy charity fly its flag to promote the Fuschia appeal, which raises money to house for members of the Irish Defence Forces.

This year the local branch of Óglaigh Náisiúnta na hÉireann (ONE) were assisted by two councillors with their own military connections – Cllr Peggy O’Dwyer, married to a former army medic, and Cllr Seamie Moore, a retired Commandant from the Irish Army Reserve. 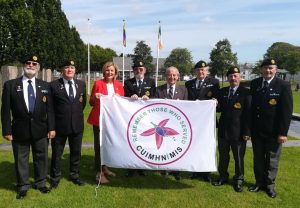 The ONE currently run three homes from former members.

The main home is in Smithfield in Dublin, and caters for 40 members, whilst there are smaller ones in both Athlone and Letterkenny.

They also run day recreation centres in Limerick and Dundalk as well.

After the harsh winter of 1988/9 seven people died of hypothermia on the streets of Dublin, and amongst them were a number of ex-servicemen.

A small group of ONE member banded together to raise funds for an ex-soldiers’ home, and in 1994 Brú na bhFiann – Home of the Brave – was opened in Queen Street in Dublin.