DAVY Burke’s Sarsfields recorded a hard fought 0-12 to 0-11 win over neighbours and reigning champions Moorefield in St Conleths Park after a pulsating game. 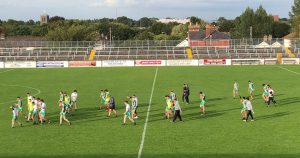 Sarsfields leave the field after their win over Moorefield

In the grand scheme of things, a win in the first round of the group stages won’t be hugely significant by the end of the Championship but this will feel like a massive win for Sarsfields against the three-in-a-row chasing Moorefield.

The Moores led 0-5 to 0-2 after 21 minutes but four points in a row put Sarsfields ahead before Eanna O’Connor’s fifth point of the half left the half time scores tied at 0-6 each.

There was nothing between the sides in the second half and it was only when Ben McCormack and Cian McConnell scored in the 58th and 59th minute to put Sarsfields 0-11 to 0-8 ahead that there was more than a point between the sides.

Moorefield had struggled in attack up to that point but struck back quickly through James Murray and Eanna O’Connor.

Robbie Confrey scored what proved to be the decisive point in the 62nd minute and although O’Connor converted a late 45 for his eighth point of the game, Sarsfields held on to inflict a first Kildare Championship defeat on Moorefield under Ross Glavin’s management.

Meanwhile, Maynooth staged a remarkable comeback to earn a 4-13 to 1-17 win over St Laurences. Despite an early Ruadhan O Giollain goal, Laurences dominated the first half and were 0-12 to 1-2 ahead in the 29th minute.

A John McAndrew goal and Sean Sinclair point, either side of Laurences’ Mark Glynn and Maynooths’ Sean Higgins getting sent off, gave Maynooth a glimmer of hope going in at the half time break.

Although he scored one first half point, the decision to play Kildare goalkeeper Mark Donnellan in the forward line didn’t have much of an effect on the game in the first half but Donnellan and Neil Flynn really came into things in the second half.

Flynn hadn’t scored in the first half but got the first two points after the break and then Donnellan levelled the scores with his second of the game.

A Shaun Fahey goal helped Laurences gain control again and after McHugh and Fogarty pointed, Laurences led 1-15 to 2-8 with 13 minutes to go.

Maynooth, though, scored three points in a row and a wonderful ball by Donnellan sent Flynn through for the goal that put the side from the north of the county ahead for the first time since the early stages. A minute later, Flynn was taken down inside the square but his penalty was pushed wide by Shane Connolly. Flynn pointed the 45 and then added a score from the right wing.

Fogarty’s 11th point of the left just two in it going into injury time but Flynn struck for his second goal to seal an important win for a Maynooth side who endured a torrid league campaign.

Earlier in the day, Celbridge had too much for Raheens to handle as they won out by 4-12 to 1-9. Davy Hughes and Paddy Brophy scored early goals but Raheens struck with a Rory Donnelly goal in the 17th minute.

Celbridge led by 2-7 to 1-5 at the break and looked comfortable in the second half as they added goals from Fergal Conway and David Byrne to pull clear.

Confey were also winners against the Division 1 runners up Carbury on a score of 3-15 to 2-10.