SO, just under a month after Cian O’Neill announced that his four year spell as Kildare manager was over the Kildare county board have once again looked to the Kingdom for his replacement.

O’Neill was coach with Kerry when he made the decision to take over the number one job in his own county back in 2015 and it is three time All-Ireland Senior Football Championship winner, 58-year-old Jack O’Connor, who the county board are proposing to succeed him. 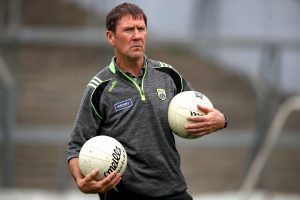 The Kildare county board have nominated Jack O’Connor for the position of Kildare senior football team for a three year term Photo: ©INPHO/Bryan Keane

More than O’Neill’s Kerry connections the appointment evokes memories of the previous Kerry native to take charge of the Kildare senior team, when Mick O’Dwyer led the county through our most successful time in the modern era.

O’Connor has strong links to Kildare football too and has been heavily involved with Moorefield since Ross Glavin took over and was on the sideline when the club won their second Leinster title in 2017.

That is only a footnote, though, in a glittering CV and barring somehow tempting Jim Gavin to abandon Dublin and throw his lot in with Kildare it’s hard to imagine the county appointing a more successful manager.

After a pretty non descript playing career the Dromid Pearses clubman was a relative unknown when he was first appointed manager of the Kerry senior team in 2004, although an All-Ireland U21 title in 1998 and runners up the following year, as well as three All-Ireland vocational Schools titles, marked him out as a manager of some repute.

After stepping down shortly after the 2006 All-Ireland Final, O’Connor wrote what was at the time a highly controversial autobiography, Keys to the Kingdom. The book was critical of many involved with GAA in Kerry but didn’t preclude him for taking the senior manager’s job for a second term ahead of the 2009 season.

He went on to win his third National League title and third All-Ireland title in 2009, a quarter-final hammering of a Dublin side who had narrowly beating Kildare in a Leinster Final one of the highlights along the way. Also in 2009, he managed Coláiste na Sceilge to a Hogan Cup title when his son Eanna scored a last gasp goal to beat a St Marys Edenderry side containing future Kildare players Paul Cribbin and Sean Hurley. 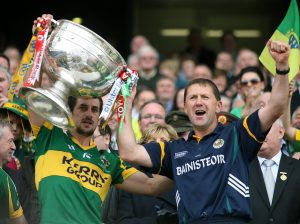 In 2011, O’Connor won his fourth Munster Senior title but Kerry were beaten in the All-Ireland Final when Stephen Cluxton’s late free kick gave Dublin their first Sam Maguire since 1995.

Defeat in the following year’s Championship by Jim McGuinness’ Donegal was the end of O’Connor’s second term when he announced his resignation a week later, even though there was a big push from Kerry clubs to convince him to stay on.

O’Connor took over the Kerry minors for the 2014 season and promptly led the county to their first All-Ireland title at that grade for 20 years, and then repeated the feat the following year. In 2016, he stepped up to the county’s under 21s and lost a 2016 Munster Final to Cork, then with the Under 20s he won a Munster title in 2017 before losing in an All-Ireland semi-final to a Kildare team containing many of the players he will now be entrusted to turn into senior stars and then earlier this year he again lost a Munster Final to a Cork side who went on to an All-Ireland title.

He has been no stranger to Kildare sidelines in recent times either. O’Connor’s two sons, Cian and Eanna, joined Moorefield in 2014 and have won three county titles and a Leinster since. 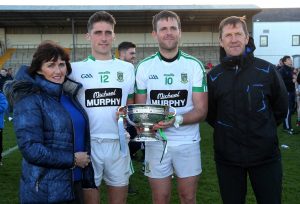 O’Connor has been there and won it all and as he heads towards his sixties could quite easily have sat back and enjoyed what has already been one of the all time great managerial careers but after a lifetime in football the hunger for more clearly burns deep inside him.

He joins a county starved of senior success and one that, like the rest of the teams in Leinster, is struggling to escape the shadow that the dominating Dubs cast over the province and beyond. But O’Connor saw at first hand the quality of the 2018 Kildare under 20s and will know all about the other successful underage sides.

Before he decides what Kildare might be capable of, O’Connor’s first job will be to get the strongest squad possible and one of his first duties will surely be a phone call to to the Flynn household in Johnstownbridge. But there are others too and no doubt that O’Connor will be casting a keen eye over the remainder of the Kildare Championship to see if there is gem out there who might fit into his way of playing.

In a 2015 interview with Weeshie Fogarty he said that kick passing was the strength of Kerry football and they should always strive to utilise those basic skills, which he felt Kerry did better than anybody else, to their benefit.

“Soloing is taboo for me, the only place I want to see a fella soloing the ball is on the top of the ‘D’ when he is one on one with a defender. Out the field, the ball has to be transferred by foot as quickly as possible to the full forward line. That is the only line on the field dependent on being fed early ball.”

“I have a clear system in my head about how football should be played,” O’Connor told Weeshie.

Assuming he is ratified at September’s county board meeting it’s exciting times ahead as he tries to implement that system and his winning mentality on the Kildare football team.