A proposed new tourist facility on an island off the Cork coast has been likened to a “space station” by one of two environmental groups opposed to the project.

Friends of the Irish Environment has criticised plans for a new tourist centre on Dursey Island to provide accommodation, a café, facilities for walkers and cyclists and a wastewater treatment system.

The group said the modernistic design of the centre included “stacked modules of reflective plate glass that are more appropriate for Star Wars than Dursey Island”.

FIE spokesperson, Tony Lowes, said the proposed facility was designed to serve mass tourism which was “totally at odds” with the very reason why visitors came to the island.

The development is being planned by Barry O’Neill, an Irish businessman based in Australia, whose maternal ancestors are from Dursey and who spent his summer holidays on the island as a child.

Consultants acting for Mr O’Neill said the building would consist mainly of traditional materials in a contemporary design.

They said the site of the new tourist centre, while on an elevated location, “blends in totally with the natural landscape and will not be in any way obtrusive”.

They said Mr O’Neill’s passion for the “organic use of the island, the preservation of its traditions and rich history and for the proposed enjoyment of this unique place is palpable”.

An Taisce, which also opposes the development, said the site of the facility was “entirely inappropriate”.

“The design and scale of the proposed development is entirely incompatible with the character of the island,” it added.

An Taisce said the provision of tourist accommodation on Dursey should focus on authentic refurbishment of derelict, unoccupied houses on the island.

Both FIE and An Taisce have called for planning permission for the project to be refused by Cork Co Council. A decision on the application is due by mid-September.

The plans for the new tourist facility are not linked to a €7m project by Cork Co Council, in association with Fáilte Ireland, to replace the existing cable car – the only one in the Republic – which connects the island to the mainland. 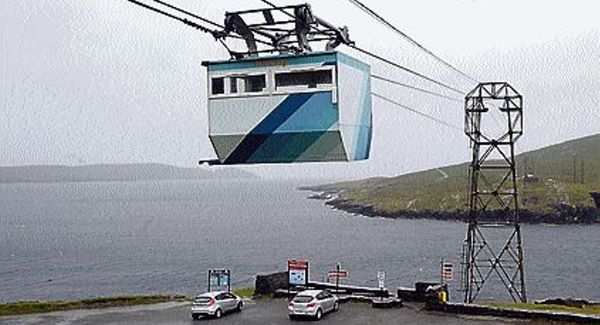 The cable car, which dates from 1969, will be replaced by a two cable car system including sheltered waiting areas as part of plans to improve facilities at a popular stopping point on the Wild Atlantic Way.

A new visitor centre, shop, café and extended parking facilities at the embarkation point on the mainland are also planned as well as an upgrade to local access roads on the Beara peninsula.

Plans for the council’s project are due to be lodged with An Bord Pleanála in the near future.

Animals were transported in the cable car, which can carry up to six persons, up to 2012 when the practice was discontinued for hygiene reasons.

Dursey, which is 6.5km long and 1.5km wide, had four inhabitants, according to the 2016 Census, although the number increases during the summer months with residents of holiday homes on the island.

The 150-metre crossing across Dursey Sound – the only cable car system across open seawater in Europe – costs €10 return and is an eight-minute journey.

There are no shops, pubs or restaurants on Dursey.

Christy Burke: ‘Only a matter of time’ before serous incident on Dublin’s Luas system