Tight battle in store between Kilcullen and Carbury

CARBURY and Kilcullen will lock horns in an eagerly awaited Intermediate Final in the last of three finals on Saturday in Sallins.

The teams have won the Junior Championship over the last two years and are looking for more silverware this weekend.

Carbury’s captain is Chloe Kearney and she thinks the club has made great progress throughout this year’s Championship. 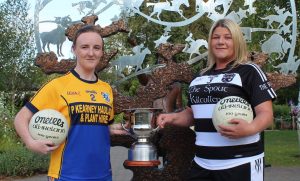 “We’ve worked really hard from the start of the year and everyone has put their heart into every training session and the lads have left no stone unturned so we are glad to get here at the end of the year.

“We have performed really well as a group so far and while we’ve had a few setbacks ultimately we’ve all worked together and that’s how we have got to a county final.

“We are making great progress as a club and our underage is improving with lots of girls coming up and as a result we have a nice mix of older and younger players so it’s a nice balance and is gone great the last few years so we are delighted,” said Kearney.

The Carbury skipper is revelling in the role of leading the team and says it’s a huge honour to captain such a talented group of girls.

“I enjoy the role as captain, I’ve been playing for as long as I remember and you always want to be captain of your senior team and to get it this year was great. I wasn’t expecting it but I was absolutely delighted and I want to do well and finish off the year as best as I can.

“Everyone is training really well and everyone is just focussed game on game so going into a county final everyone is just buzzing and it’s what everyone wants at the end of the year so now that we are here we have to enjoy it as they don’t come around every day,” said Kearney.

Kilcullen are still unbeaten in this year’s Championship and Carbury know the task that awaits them.

“Kilcullen are a super team and they have some brilliant players. Their underage is going great and we aren’t taking anything for granted as we know each other fairly well so it’s just going to be who performs well on the day and it’s going to go down to the wire,” said Kearney.

It’s only twelve months since Kilcullen defeated Na Fianna to win the Junior Championship so the progress the Rags have made has been instant at a higher level and they even got the better of last year’s finalists Naas in their semi-final.

“We are thrilled,” said their captain and full back Eimear McBride

“We went into the Intermediate Championship not really knowing what was ahead of us and to continue unbeaten ahead of a final is pretty class. Naas in the semi-final was a good test and the weather made things difficult but after a rocky start we dug deep and fought hard to get the result we wanted in the end,” she added.

Kilcullen are backboned by huge underage success which has seen a number of younger players progress onto the senior team in recent years.

“It’s a very young squad and the talent coming through is unbelievable. The underage in the club is second to none and last year was the first time that we won titles at all the ages so hopefully the talent keeps filtering through to our team and a few of them have came on this year.

“These girls only know winning. We tell them what a big deal it is tobe in an Intermediate Final but they are used to big games and what they have brought to the squad is brilliant and they are a fantastic group of girls,” said McBride. 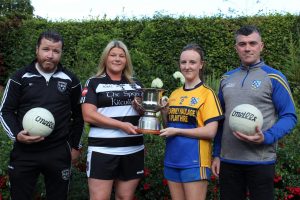 Kilcullen are very much addicted to the winning habit at the moment and they will hope to add more silverware at the weekend.

“We’ve worked really hard all year and we just have to go and do what we do on Saturday and bring home the Cup. There is no doubt it will be a hard fought battle and Carbury are a good team but hopefully we will come out on top,” said McBride.