WHAT relevance league form when it comes to Championship? Not much judging on the goings on in Group 1 of the Joe Mallon Renault Senior Football Championship today.

Maynooth, who lost 10 and draw one of their 11 league games this year, became the first side into year’s quarter-finals by beating Castledermot by 0-16 to 1-12. The result had ramifications elsewhere too as the it consigned Division 1 league champions Naas to the relegation semi-finals.

Castledermot dominated much of the first half and led 0-7 to 0-5 at the break but after being held scoreless for the first half, Neil Flynn sprung into life in the second period and ended up with six points. The brave decision by manager Karl Ennis to play Mark Donnnellan continues to pay dividends too and after scoring three points in the previous round against St Laurences, he went one better by scoring four today. 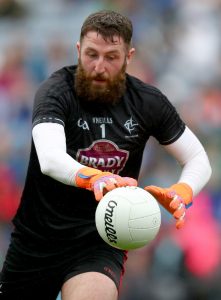 The decision by Maynooth manager Karl Ennis to play Kildare goalkeeper Mark Donnellan in the full forward line has proved to be a masterstroke and has paid off in spectacular style
Photo: ©INPHO/James Crombie

Castledermot pushed hard in the closing stages and scored the last two points of the game but they couldn’t get the result they wanted, and the one that Naas needed. It means that the Maynooth v Naas game in the final round of the group stages is a dead rubber game while Castledermot meet St Laurences to decide second and third in the group.

Sarsfields also booked their place in the quarter-finals after a 2-15 to 1-9 win over Eadestown. A 26th minute penalty by Ray Cahill put Davy Burke’s in charge at 1-7 to 0-2 ahead but Eadestown scored the last 1-3 of the half, the goal coming from Cian Bolton, and trailed by just two at the break.

Sarsfields took control in the second half and after ran out comfortable winners after Declan McKenna’s 39th minute goal.

In the same group, Moorefield were made to work harder for their win over Two Mile House than the 2-19 to 1-15 result might suggest.

The current senior champions raced into a 0-9 to 0-3 lead but Two Mile House hit a golden spell late in the first half when they rattled off six points in a row to draw level. The ‘House had plenty of excellent performers but U20 international athlete Tony O’Connor really caught the eye.

A Ronan Sweeney goal in injury time put Moorefield 1-10 to 0-10 ahead by the break though.

Moorefield led by eight going into the final quarter but a gallant Two Mile House kept plugging away and got their reward with a smartly taken Gavin Burke goal in the 49th minute.

There was only five points between the sides injury time when Two Mile House seemed to have legitimate claims for a penalty waved away when Chris Healy appeared to be dragged down in the square when in the act of shooting.

Just a minute later, with Two Mile House committed to attack, Moorefield broke and won a penalty themselves, which was brilliantly dispatched by Mark McDermott.

The result means that 2018 Intermediate champions Two Mile House drop into the relegation semi-finals and that their final group game against Sarsfields is also a dead rubber. Moorefield will face Eadestown to decide the second and third placings in their group.