Kill and Milltown to contest Junior ‘B’ Final

KILCULLEN will play host to the last of the Ladies Football Finals on Saturday afternoon with the meeting of Kill and Milltown kicking off proceedings in the Junior ‘B’ final at 2pm. 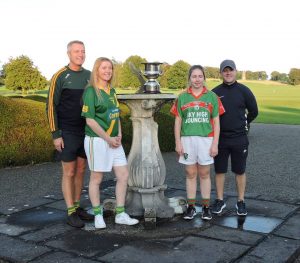 Kill and Milltown meet in the Junior ‘B’ Final in Kilcullen

Kill come into the game having won the Junior ‘C’ title last year while Milltown will be hoping to go one better after losing out to Rheban by a point at the this stage 12 months ago.

Kill captain Michaela Kavanagh knows the rise up through the ranks has been quick but even still they come into the game with high hopes.

“It’s a brilliant achievement to get to the Junior ‘B’ final after winning the ‘C’ last year. We all had this plan and process in our head and it’s all going to plan. It’s a huge thing but in our heads we deserve to be there and that is our goal and ambition to keep going to the top.  Our team is a bit changed from last year with a few new players coming through,” she said.

It’s a county final weekend but on the edge of the Kildare and Laois border the Electric Picnic Festival is also taking place. Kill will have a close eye on that with a number of players attending as one of their own Sinead Keogh is playing there but she will still be available for Saturday afternoon.

“We have a couple of players going off to Electric Picnic but the whole team will still be there for the final including Sinead Keogh who is in the Trad Band and is performing on both days,” said Kavanagh.

Kill got to the final by defeating Celbridge in the last four and after recently beating Milltown as well they will go into the decider in a confident frame of mind.

“Celbridge were a good team and very tough to beat with some good young players. They were a different team from last year.

“We played Milltown a couple of weeks ago and got a win over them, we were behind by 9 or 10 points at half-time but we ended up beating them well and that will give us confidence for the weekend.

On the other side, Milltown are aiming to make up for last year’s disappointment and skipper Lisa Murphy admits they know they are going in against a very good side.

“We have a good chance and it will be an exciting game against Kill as they are a strong solid team but so are we and hopefully we can go on and do it. We are confident enough but we know Kill are a good side as well and it’s going to be a really exciting game.

Milltown’s progress over the last couple of years has been built on the influx of a progressive underage structure which has seen Lara Curran and Lauren Murtagh prosper on the Inter-County scene and it is helping the club out no end.

“Lara Curran and Lauren Murtagh are both brilliant footballers. Lara is a heavy scorer and Lauren is strong in defence and we also have the likes of Claire Sweeney and Nicole McCullagh who are all strong underage players for us so we have good players there.

“As a team we have had a few ups and downs in one or two games but we have definitely gelled together since and the last few training sessions have gone really well,” Murphy said.

After drawing with Ballymore earlier in the campaign, Milltown would have been relieved to get over them in the semi-final and they are desperate to get over the line on Saturday.

“We drew with Ballymore earlier in the Championship and they were a strong team so we were delighted to beat them by three points in the semi-final. The experience of being in last year’s final will suit us and we will drive for it. A lot of the girls are more hungrier for it this year and while it was really upsetting to lose last year’s final with only a point in it against Rheban we hope to change that on Saturday,” said Murphy.