A LOCAL historian generously dedicated his second book to the memory of his late school friend at its launch in Newbridge recently.
Paul Cooke’s latest 350-page missive A History of Christianity in Newbridge-Essays on Sacred Places in St Conleth’s Parish was launched in the library for Heritage Week.

He dedicated it to the memory of his Patrician College pal Fr John Cummins who died in a freak car accident in Co Laois earlier this year.

“His family have had the pub [Cummins] across the road from the library since 1907,” explained Paul, before the Kildare Nationalist got him to focus on the other history from a millennium earlier. 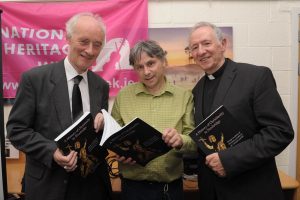 The book was written to commemorate the 1,500th anniversary of St Conleth’s death, when he was devoured by wolves on a pilgrimage to Rome.
“We [the Newbridge Historical Society] were going to launch it for the anniversary in May, but decided to leave it to Heritage Week,” explained Paul.

“I had over 1,000 headstones read in a dozen graveyards around Newbridge that made it into the book,” he said.

“These graves are going back to medieval times, back to the 5th century. They were all in use up to the mid-fifties,” he continued.

”These were all major church sites of the parish. For example, Barrettstown was associated with St Patrick, and there’s three essays on Graigueconnell Abbey,” he went on.

Paul is originally from the town “has a great passion for local history”.

In 2010 he founded the Newbridge Historical Society to promote this.

“We do as much as we can to promote the history of the parish,” he said simply.

This is his second publication, with the first being about Great Connell.

His third – due out for next Christmas – will also be about Newbridge history, but is as yet untitled.

The book is on sale at the parish centre and in Farrell’s Bookshop, the town’s only independent bookstore “who support all local writers”.