ALTHOUGH it was Limerick’s Sinéad Flanagan who was ultimately crowned 2019’s Rose of Tralee, Kildare Rose Emer Fogarty captured the hearts of the nation following her appearance onstage in Tralee last week.

The 24-year-old, who works with Dublin firm Version 1 as an organisational psychologist, gave a beautiful performance of The Parting Glass, which she dedicated to her father who died suddenly in 2016 at the age of 54. Speaking to presenter Daithí Ó Sé, Emer recalled a memory that stands out – on their way into the church behind the coffin, on either side of the car were players from all over Ireland, some of whom her father had managed, with GAA jerseys tossed over their shoulders.

Emer described it as one of those moments when you realise that when you’re part of something like the GAA, you’re part of something special, and said it was something she’s very grateful for and won’t forget. The message behind the song, she added, is that life is a mix of joy and sorrow but it’s about “embracing the dualities of both” – that’s what makes us human and makes life worthwhile.

Speaking to the Kildare Nationalist, Emer explained that she sang the song at the Kildare Rose Centre – when she performed it for the first time it was really emotional and she felt if she got through that she was able for the bigger stage. “But to be honest, when you’re on stage like that and you’re absorbed in what you’re doing, you almost forget about the cameras, you forget about the people and it’s just really… it’s just delivering a message and it’s just … singing from the heart,” she said. 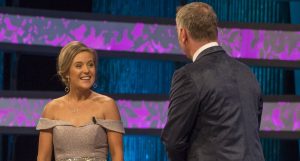 “I actually loved it, to be honest,” she added of being onstage in the Dome. “I was surprised – I actually wasn’t too nervous, which was good. I think because we had been probably building a bit of a rapport with Daithí, that by the time you go out you kind of feel like it’s just really a chat, and he makes you feel very much at home on the stage.”

On-hand in Tralee to cheer her on was her mum, brothers Padraig and John (who came home from Melbourne for the festival), boyfriend Ian and uncle John Doyle, alongside a host of other family, friends and well-wishers. Emer explained that ‘disappointment’ is a word she has told her family they’re not allowed to use.

“I’m so happy for Sinéad and she’s going to do an amazing job.”

Emer added that despite having been prepared for “what an amazing experience it would be,”  her expectations were completely exceeded by the 60th edition of the festival. She said that she took great pride in representing her county and added that one of the highlights was the Roses’ tour in Kildare beforehand, especially their trip to Moone where they got a great reception. Kildare certainly came out in force to support her – placards and signs declared that people across the county were behind the Kilgowan woman, while her club St Laurence’s hosted a Rose of Tralee party to cheer her on.

The Rose ball and parade in Kerry were “just incredible”, surrounded by applause and smiling faces – the parade drew thousands of people onto the streets. “You’ve got people of all ages just waving and smiling and they come out to see you and to celebrate the Rose of Tralee,” she said. “It was in those moments, and especially when I passed my own crowd in Paddy Mac’s, that I realised I was really involved in something that’s really, really special.”

One of the best parts, she noted, was enjoying everything with a diverse group of Roses from across the country and indeed the world, with friendships forged through shared experiences, not to mention the escorts. “We’ve just had so much fun,” she said, explaining that she didn’t stop smiling after she landed in Tralee. “I’ve just had a ball.”

For now, it’s back to normality and routine for the Kildare Rose, who is looking forward to what’s next. She also has some advice for women considering going for the competition next year – go for it.

“It’s a once-in-a-lifetime experience,” she said. “No matter what comes of it, whether there’s victory or not, even at the Kildare level, there’s so much to be gained. It’s such a special time, such a special experience, and just such a celebration – so just go for it!