INDEPENDENT protests by beef farmers outside Kildare Chilling have been stood down for the moment following talks yesterday (Monday).

Farmers, frustrated with the lack of progress on issues facing their sector, including a fair price for their product, have been protesting outside the Kildare site (and elsewhere around the country) in recent days. At one point on Monday two HGVs were parked on the nearby footpath, while farmers aired their ire at another truck which took the turn into Kildare Chilling at an unduly fast pace on a wet surface, passing very close to where people were standing.

A large crowd turned out on Sunday and gardaí have said that an incident that occurred “outside a meat processing plant in Kildare” that day is the subject of enquiries. In a statement, gardaí explained that one male protestor in his 60s was injured and taken to Naas General Hospital. 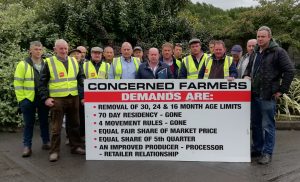 Farmers were also on-hand last week when a Chinese delegation visited the processing plant – an RTÉ report noted that protestors held posters with Chinese slogans. Officials from that country have come to Ireland for inspections with a view to increasing exports to the Chinese market.

Negotiations with Kildare Chilling began on Monday morning and concluded in the afternoon, with John Dallon, Enda Dunne and Pat Knowles representing the farmers. Mr Dallon explained that they went in with “full intentions” of getting the slaughter of cattle stopped indefinitely, but ultimately that didn’t pan out.

In the end, Kildare Chilling agreed that cattle wouldn’t be killed on Monday, Tuesday and Wednesday of this week, with talks to recommence at 2pm on Wednesday. “Up to that, there is no cattle being killed,” Mr Dallon explained, adding that they are stepping down the protest outside Kildare Chilling to allow farmers enter freely with their sheep for slaughter. “We have given [an] undertaking that they will be stepped down till such time [as] talks resume again,” he said. The threat of all litigation has also been suspended until after Wednesday.

“If talks break down and we can get no good, we’re all back out protesting again,” he said. “So that’s where we’re at with it now.”

The hope is that talks at a national level will be “moving on” with parties such as Beef Plan, Meat Industry Ireland (MII), retailers and Minster for Agriculture Michael Creed.

On Friday, MII called on protestors to stop blockades “immediately”, saying in a statement that operations have been brought to a halt in 12 plants with resultant lay-offs and “significant losses”. Minister for Agriculture Michael Creed, as reported in the Irish Independent on Monday, has said there is a need to get back around the negotiating table.

And IFA President Joe Healy has remarked that Minister Creed should instruct meat factories to come forward with proposals to bring full transparency to the sector. “The Minister has to call in the meat factories and insist that they come forward with realistic measures around transparency and price that will improve the income of beef farmers,” he said. “There is no point in having talks unless there are serious proposals on the table.”