Friends raise €12.000 for Friends of the hospice

“IF he keeps fighting, we’ll keep the fire lit,” was the sentence Breda McCormack remembers most dearly from the recent fundraiser in aid St Brigid’s Hospice on the Curragh where her Martin’s is being cared for.

Recently a group of nearly 80 friends and family of the McCormack family from Robertstown and Rathangan organized a charity cycle in aid of the hospice, raising an  an impressive €12,250 on the day

“It was organized by people from Robertstown and friends Martin used to play GAA with in Rathangan back in the 70s and 80s,” explained Breda.

Originally from Rathangan, the McCormacks now live in Annesboro, Robertstown. 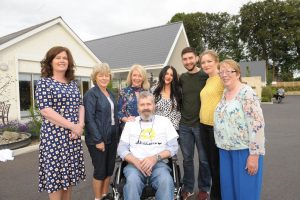 “It was done between old friends from Rathangan and Robertstown who would prefer to stay in the background,” she explained when the Kildare Nationalist pushed Breda for names.

“The Robertstown lot cycled to Rathbride Cross where they met the Rathangan people, and then they all cycled to the hospice where the  whole family met them,” explained Breda.

“Then it was back to The Burrow [Rathangan] for refreshments! And the raffle!” she added.

Breda and Michael have been married 38 years, and have two children – Glenda and John – and two grandchildren.

Michael, a carpenter by trade – “all the family were in the buildings” – was diagnosed with bowel cancer five years ago, before a more serious re-occurrence recently.

The McCormacks are a very musical family and Glena, who used to play with Bun Os Cionn, was seen last weekend on a particular stage in Stradbally.

“Ah, it was a great boost for Martin to see all the old friends he used to play football with back in the 70s and 80s.  And young ones as well!” she added.

“A lot of them cycled back, but the Robertstown crowd probably had it harder – they had to go back over the Hill of Allen!” she joked.

“But it was a great achievement, and it was only organised in a couple of weeks. Great workers and great people,” she added.