AFTER the long and meandering road through the preliminary round and group stages we have finally reached the business end of the season and the knockout stages of the Joe Mallon Renault Senior Football Championship. Barring replays, by the end of the weekend we should know who is joining Sarsfields, Athy, Celbridge and Maynooth in the quarter-finals of the competition.

There are some very evenly matched games to be decided this weekend before the final eight are confirmed.

A meeting between two of the success stories of the group stages. These are the two teams that won the relegation semi-finals last year and yet now, one of them will progress to this year’s quarter-finals.

Their paths through the group stages have been very different. Drawn with the Newbridge giants of Moorefield and Sarsfields, it was always unlikely that they would take anything from games against those two so Eadestown’s Championship basically boiled down to one game against Two Mile House in the opening round of the group stages.

A late Cian Bolton goal helped Liam McLoughlin’s team to a 2-12 to 1-9 win that day, putting them in the knockout stages again after three successive years in the relegation play offs.

Castledermot probably had a tougher journey through the group stages after being placed in a much more balanced group. Damien Hendy’s team finished bottom last year when they were placed in a group with Naas, St Laurences and Maynooth but up against the same teams this year, managed a second place finish after impressive wins over Naas and St Laurences.

Scores have been hard to come by for Castledermot and they rely heavily on Gavin Keating in their forward line but he has been in impressive form to carry their attack, although he is assisted well by Paddy Whelan who may not get the scores that Keating does but does a lot of the hard work for the team. 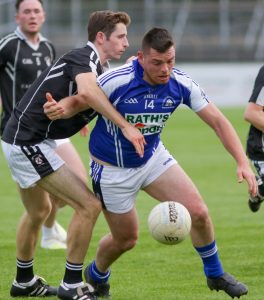 This is the first meeting of the teams at senior level since their respective Intermediate title wins in 2014 (Eadestown) and 2015 (Casltedermot).

Castledermot’s well organised defence has frustrated better teams that Eadestown so far this year and although there’s not likely to be much between the teams by the final whistle, the south Kildare side might just edge it.

AFTER their excellent win over Round Towers in the final round of the group stages, Clane were paired with the one team that everybody wanted to avoid in this round.

Last Saturday was still a joyful one for the club, though, as it means they have avoided the relegation play offs for just the second time in six years. The team have shipped lot of hammerings and had a lot of dark days since they forced Moorefield to a replay in successive years in 2013 and 2014 but it looks as if all their recent underage success is finally starting to come to fruition at senior level, Sean O’Dea is a fine manager to harness all that.

That said, it’s hard to see anything other than a Moorefield win here. Ross Glavin’s team had their dip with a shockingly poor performance against Carbury in the league semi-final and then lost their first Kildare Championship game since the 2016 final when beaten by a point by Sarsfields in the first round of the group stages. Who knows though, perhaps those defeats at that time of the season may yet benefit the team. They had games against Two Mile House and Eadestown to rediscover some of the attacking rhythm and although there were spells in both of those games that were below par, there were other signs too that they were getting some sort of form back. Eanna O’Connor missed both of those games and his return would add an extra string to their attacking bow. 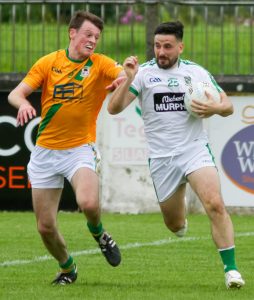 A difficult game to call between two teams who showed wildly contrasting form through the group stages.

It’s a first Championship meeting for the two since the first round in 2016 when Confey needed a replay to pick up the win. It could be as close again.

Confey scored 3-15 in the first round of the groups against Carbury but haven’t found the same scoring fluency since. The likes of James Gately, Hugh Lynch and David Slattery still carry much of their attacking threat but Ian Devane and Niall Carney have also performed well this season.

Without wishing to be so simplistic as to reduce this game down to one player, the result of this match may hinge on the performance of St Laurences full forward Padraig Fogarty. Laurences have a good forward line around Fogarty with the likes of Jason McHugh, Shaun Fahey and youngster Adam Steed but more often than not, Fogarty is the difference maker for Laurences. 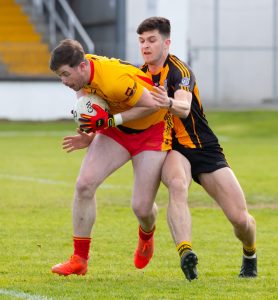 Padraig Fogarty carries much of the St Laurences attacking threat on his shoulders Photo: michaelorourkephotography.ie

That won’t be news to Confey, they will know all about Fogarty’s talents and his ability to make scoring off either foot look easy but it’s one thing knowing about it, it’s another thing to stop him. If Fogarty is firing, Laurences might just shade this to reach the last eight.

The undoubted tie of the of the round from the moment the draw was made sees the two old rivals pitted against each other once again in this year’s Championship.

Just as when they were paired together in the first round of 2017, Johnstownbridge came out on top when they met in this year’s first round but now at the do or die stage of this season, there is much more at stake this time around. 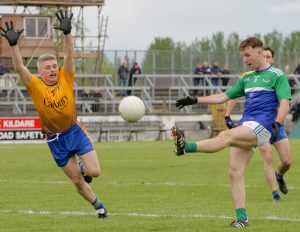 Sam Doran’s goal was the difference when Carbury and Johnstownbridge met in the first round of this year’s Championship
Photo: Luke Wynne

Since winning the Intermediate title in 2013, Johnstownbridge have been to the semi-finals twice and reached the quarter-finals on three occasions. They have shown great consistency and at times really looked capable of competing with the very best teams in the county. However, they look a little more vulnerable this year than perhaps at any other time since their return to senior. Sean Hurley’s unavailability around midfield is a huge loss and Paul Cribbin is unlikely to feature again this season. Any team in the county would feel the loss of two such fantastic players. They had only a point to spare in wins over Clane and Round Towers in the groups and never really looked like getting the better of Athy in the final round.

They are still a side containing real talent and a forward line containing Dan Flynn, Cathal McNally and Sam Doran is capable of causing problems for anybody. They also have underrated hard workers like Jimmy Farrell and Kelvin McNally.

However, it’s in midfield where the real fun of this game will be and the match up between Luke Flynn and Aaron O’Neill could be the highlight of the weekend. Luke started last week’s game against Athy at full forward with his older brother Daniel in midfield but that swap was switched around midway through the first half and the brothers reverted to their more usual positions so it would be a surprise if Luke lined up anyway else other than the centre of the field. Luke’s athleticism, mobility and pace around the field marks him ahead of most midfielders in the county but O’Neill is capable of matching him in all those areas and how that battle plays out will be fascinating.

Carbury haven’t shone as expected in the Championship so far. Rather than get a confidence boost from their run to the Division 1 final, the run of games seemed to plague them in group stages and they only reached this stage thanks to a one point win over Raheens in the final round.

Eoghan O’Flaherty will once again be their go to man in attack but they will need more than just one player. The experience of Derek McCormack is important and Jimmy Dunne and James Kelly are capable scorers too while manager Philly Wolfe will hope this is a day when one of the Cullys, Jack or Mark, or Justin Reilly from a little further back catch fire in front of goal.

It should be another closely fought game between two teams who have yet to their show their best form so far in the Championship this season, the team who can get closest to that will end up in the last eight.