A NEWBRIDGE hairdressers forced to move after the closure of Spin Activity last week managed to do so overnight and were set up the following morning without an appointment missed.

Salon Social, a hair and beauty salon that shared premises on Station Road with the ill-fated activity centre, were one of a number of satellite businesses left with no other option when their anchor tenant was forced to close on account of their impossible insurance situation as reported in last week’s Naas-Newbridge Nationalist; 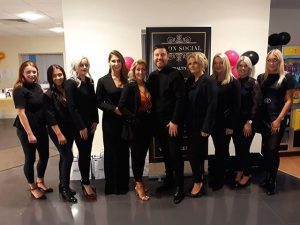 “We emptied the entire salon yesterday, and set up overnight to start again for 9am this morning,” co-owner Chris Houlihan confirmed on Thursday (29 August ).

“Everyone helped. There was vans outside here til all hours last night,” he explained.

‘Here’ as he says is their new, temporary premises in the Newbridge Industrial Estate behind the Dancetones studio where they expect to stay for a number of weeks until they secure a more permanent base back in the town.

“We’re all set up here, but we got a great response on social media,” said Chris.

“We’re in negotiation for a new premises, and would hope to be in within six weeks,” he said.

“It’s been a terrible situation for everyone,” said Chris,  and commiserated with the JTR Swim School that operated out of Spin, and had to close its doors.

He confirmed that all phone numbers and online bookings with the now two-year old business were “all the same”, and apologises to all loyal customers for any inconvenience caused.