MOOREFIELD had to come from behind before booking their quarter-final place after they were pushed all the way by a gallant Clane side. There was excitement aplenty in St Conleths Park as the Joe Mallon Renault Senior Championship finally reached the knockout stages and preliminary quarter-final double header in St Conleths Park proved value for money for those who paid in. 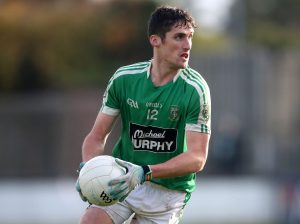 Eanna O’Connor was in superb form for Moorefield in their win over Clane
Photo: ©INPHO/Bryan Keane

For much of the first half of Moorefield versus Clane it seemed like those present would witness one of the biggest shocks in recent years. After a 24th minute goal by Shane O’Sullivan, Clane led by 1-7 to 0-3 against the reigning champions and a potentially huge upset looked on the cards.

Crucially for Moorefield, they scored a goal late in the first half when Adam Tyrrell fisted home from close range after David Whyte’s shot dropped shot, and Eanna O’Connor then kicked a monster 50 metre free to leave just three in it at half time. Clane could have been further ahead at the break but O’Sullivan’s shot deep into injury time went inches past the post with goalkeeper Ian McDonnell well beaten.

As often is the case with Moorefield, they produce their best when their backs are to the wall. After Danny Egan kicked the first point of the second half, Moorefield outscored Clane by 1-4 to 0-1 over the next ten minutes, Niall Hurley-Lynch scoring the goal in the 36th minute.

Eanna O’Connor kicked superbly throughout the game and finished with seven points. His dead ball kicking broke Clane’s hearts in the second half and Moorefield dominated the final quarter to keep them in the hunt for a third successive title with a 2-12 to 1-10 win. Despite the result, it was a performance that hinted at a great deal of promise for Sean O’Dea’s young team.

Moorefield will be joined in the last eight by surprise packets Eadestown after they beat Castledermot by 4-9 to 1-10 earlier in the day.

After spending the last three seasons in the relegation play offs, to reach this stage of the Senior Championship is a major achievement by Liam McLoughlin’s team.

Eadestown scored two of three goals that were scored in blistering 90 second spell in the first half half and they led 2-5 to 1-5 at the break.

Conor McCarthy scored his second goal of the game in the 40th minute and Cian Bolton, who finished the game 1-7, made sure of the win with his team’s fourth goal in the 53rd minute. Castledermot finished the game with 13 players following late red cards to Emmet O’Keefe and Liam Cosgrave.

In the Intermediate Championship, Sallins and St Kevins booked their place in the quarter-finals. Sallins beat Nurney by 0-15 to 1-9 in a game where Sallins wore Maynooth University jerseys and Nurney were in Moorefield jerseys after a clash of colours.

The quarter-finals for the Joe Mallon Renault Senior Football Championship should be completed on Sunday when Confey play St Laurences, at 2pm, and Carbury meet Johnstownbridge at 4pm, both in St Conleths Park. Rathangan play Straffan at 4pm at the same stage of the Intermediate Championship.

The draw for the quarter-finals of the Senior and Intermediate Championships will be made immediately following the second game in St Conleths Park on Sunday.

In hurling, there is a triple header of games in Clane, culminating in the highlight of the quarter-final tie between Celbridge and Éire Óg Corra Choill. Preceding that, Naas play Ros Glas in the Junior semi-final at 2.30pm and Kilcock play Maynooth in the Intermediate semi-final.