Teddybears, walks and talks make for a busy weekend

ATHY’S first-ever Teddy Bear Picnic was a fantastic success, with around 1,000 people descending on the People’s Park on Sunday 25 August for an event chock-full with family fun.

The event was organised by the Athy Town Promoters and supported by Kildare Co Council and Conlan’s Family Store, and celebrated the final weekend of the summer holidays before the dreaded return to school, offering families a chance to make some great memories.

Patricia Berry from Athy Town Promoters described it as an amazing event and thanked the volunteers who helped to make it another Athy success story. People turned up at the park in their droves with picnics and teddy bears as the sun split the stones, with kids enjoying bouncing castles, games and more. As Athy Municipal District Cathaoirleach Mark Wall previously explained, the hope is that a Teddy Bear Picnic will be held every year. 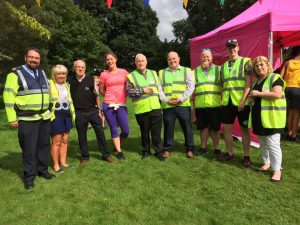 Some of the hard workers

“What a great afternoon of music and play and most importantly everybody enjoying themselves,” Cllr Wall remarked on social media after the picnic. “Great to see such a large crowd at the first ever picnic, looking forward to next year’s already!”

The event was one of several held around the area that weekend, taking advantage of the fantastic summer weather. On Saturday (24 August) family fun days were held in Flinters Estate and in Ballyroe, while the following day a fundraising 5km walk – organised by Tina Preston, a Slimming World consultant in Athy – raised funds for the Irish Cancer Society, and the Athy O.N.E St Michael’s Branch held its annual mass and wreath-laying ceremony in St Michael’s parish church and the Marion shrine grotto.

Sunday also featured a biodiversity walk and talk down by the Barrow and Grand Canal as part of National Heritage Week, with attendees discovering the variety of wildlife that call those wetland environments home.

“Thanks to all who attend the morning walk and talk down by the River Barrow for [Water Heritage Day] and a massive thank you to our Community Water Officer Aoife McGrath and Nuala Madigan, Education Officer for Irish Peatland Conservation Council for a very informative event,” said Ms Berry. She also noted that another upcoming event in the town will see An Garda Síochána Crime Prevention Officer George Doherty give a talk on safety in the community at Woodstock Community House this Thursday (5 September) at 11am.

Local councillor Veralouise Behan was at several events across what she described as an “amazing” weekend. “It’s so inspiring to see the creativity, and the positive resilient efforts of the people of south Kildare, who want good things for their communities,” she remarked on Facebook.