WE send best wishes this weekend to this year’s Miss Kildare 2019 who will be flying the Lilywhite flag in the Miss Ireland competition.

Celbridge resident Naomi Molloy, 23, will be compating against 31 other competitors in The Helix this Saturday 14 September.

Naomi is originally from Donegal and moved to Celbridge about a year ago. The youngest sibling in her family, she studied Applied Food Science and Business Management at St Angela’s College in Sligo. 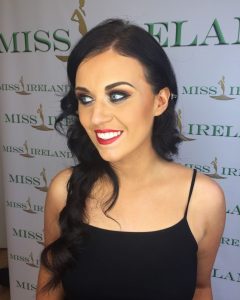 She describes herself as “a very outgoing young person. I love keeping fit, cooking, baking, socialising and travelling!”

Since her selection as Miss Kildare she has embarked on a mental health campaign in the workplace. She has also organised a charity afternoon tea for various children charitieis.

“I will be continuing to promote mental health awareness after the competition,” she said.

The winner of Miss Ireland goes on to represent her country at the Miss World competition in London this December, where the top prize for the winner is $100,000.