WHEN the draw was made on Sunday for the quarter-finals of the Joe Mallon Renault Senior Football Championship there was a 75% chance that Moorefield would be paired off against one of the other three teams who have separated themselves away from the rest of the championship but the fixture gods intervened.

After Moorefield were placed in the same as group as Sarsfields there was no way that the two could take the short route to the quarter-finals but once Sarsfields won the battle of Newbridge, Athy and Celbridge topped their group as expected after winning all three games. In Group 2, Maynooth took advantage of the absence of any of the top four to finish on top.

In just their fifth quarter-final since their last Intermediate title in 2009, Maynooth were definitely the outlier when compared to the other teams that Moorefield could have drawn.

As it played out, Moorefield were paired with Maynooth, the fact that the teams are managed by brothers-in-law Ross Glavin and Karl Ennis adding a bit of spice to that one, and now the four strongest teams in the county will be strongly fancied to progress.

Since the start of the 2013 Championship, those four teams have played 84 matches against the rest of the Senior Championship.

In those 84 matches, St Laurences’ win over Athy in 2015 is the only time that a team from outside of that elite group has beaten one of the fearsome foursome. 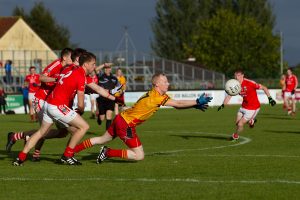 St Laurences’ replay win over Athy win is the only time since 2013 that one of top four sides in the county have lost a Senior Football Championship game to a team from outside that group
Photo : Piotr Kwasnik

That means that of those 84 games, the top four have beaten the rest of teams in the other 78 games.

During those 78 wins, 27 have been by ten or more points with only 14 being settled by three points or less. 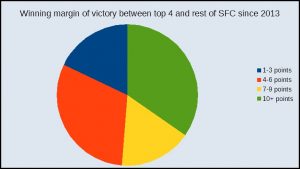 Moorefield’s last Championship defeat to a side outside the top was the 2011 quarter-final against St Laurences, Celbridge were beaten by the Larries at the same stage in 2012 while Sarsfields were beaten by Naas in the 2012 first round.

Despite the dominance since that 2013 season only once since have the fixtures aligned to allow all four progress to the semi-finals, in 2014. That has allowed others to break through to the last four – Naas (2013, 2018), Johnstownbridge (2015, 2017) and Confey (2016). Johnstownbridge have probably been the closest to joining that group since their Intermediate win in 2013 but as consistent as they have been in other games, they haven’t managed to land one a landmark win.

These stats go to show just how difficult Maynooth, Eadestown, Confey and Johnstownbridge will have it this weekend. The beauty of sport means that you can never be sure of anything before the event but there is no doubt that the top four have distanced themselves from the rest of the county and that anything other than all four progressing to a mouthwatering semi-final line up would be a major shock.